In order to grasp the concept of color formation in crystals, let us take into consideration different metals. In metal crystals, a certain number of outer electrons is practically freed from the individual atoms of the metal and belongs to the crystal as a whole. This has as its consequence the fact that electrons can move relatively freely throughout the crystal. This in turn explains the great electrical conductance of the metals and their use as charge carriers.

The characteristic metal glow is a consequence of these free electrons as well. Those electrons that are nearer to the metal surface are capable of absorbing practically all wave lengths within the visible part of the spectrum, meaning that visible light would not pass through the crystal. On the other hand, this absorbed light is being almost momentarily reflected by the decaying electrons back from the surface, and depending on the additional characteristic of the electronic system this behavior leads to the characteristic metal luster.

Almost all gems and semiprecious stones possess the feature that their electrons are unable to absorb all frequencies from the visible light spectrum. Very often only certain energies are being absorbed, while others are being transmitted through the crystal. This is mostly due to impurities, since most of the gems and crystals in their purest form are in fact transparent. Diamond, for instance, in its pure form is always transparent. This means that its electrons are unable to absorb any of the energies from the visible domain, so the light is being transmitted through the whole volume of the crystal. Only light whose energy is larger than 5.5 eV, that is, light from the ultraviolet part of the spectrum, can be absorbed by the electrons. Bearing in mind the limitations of our physical sight, this does not influence the crystal color.

Regardless of the fact that diamond is transparent for visible light, the light that falls on the crystal can be partly reflected from the crystal planes, facets, etc., which produces the specific shine that has been attracting people for centuries. The so called brilliant glow of the diamond is partly a consequence of the way of faceting raw diamonds. A nicely faceted diamond, or other stone, will by means of total reflection bring back almost the total amount of light that falls onto it - this produces its brilliant shine. If, during the reflection, we are also faced with dispersion (decomposition to various shades of colored light) of the white light, then we can get the specific fiery appearance of the precious or semi-precious stone. 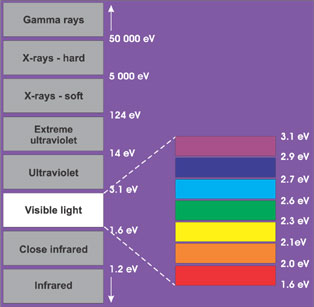 The basic characteristic of light is that it carries a certain portion of energy. Based on the quantity of energy, the diagram on the above figure illustrates and classifies all know sorts of electromagnetic radiation. It can be seen that the energy range of visible light is only a very tiny part of the full spectrum of radiation that is currently known to science.

Colorless, white or violet these colors open the door of perception; bring unity with the Universe and transcendental love.

Red crystal is a symbol of life, vitality, power. It moves energies, it worms up.

Yellow crystals help the indigestion, influence the normal functioning of the liver, gallbladder, kidneys and spleen. They release subconscious fears, and promote balance.

Green crystals represent the color of love, health, harmony and creativity. They help with heart disorders, regulate the blood pressure, calm the nerves and stimulate love.

Indigo colored crystals bridge the span between the limited and limitless. They bring universal knowledge and wisdom, cure the eyes, deal with insomnia and stabilize mental perception.