Celestite is an excellent healing stone for the eyes, ears and mental disfunction. It eliminates toxins and is also good for digestive problems. In healing, it has the ability to replace pain with loving angelic light. It attracts luck, reveals truth, brings balance, and within this stone one can discover the energy of peace.

Except for blue shades, celestite comes in colorless and yellowish nuances, and sometimes also in red, green or brown. Celestite crystals are transparent or translucent, with glassy, waxy glow.

Celestite is also known under the name celestine, and both are derived from the Latin word for "of the sky" or "heavenly" due to its remarkable blue sky color.

Celestite is a favorite stone of many mineral collectors. Its heavenly blue color is unique in the mineral kingdom. It also creates beautiful specimens and useful conbinations with others colored minerals. Blue celestite with light yellow sulfur is one of the most famous color combinations of minerals. 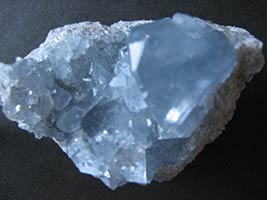 Its chemical composition is SrSO4, that is strontium sulphate. It has the same chemical structure as BaSO4 barium sulphate - barite. Both minerals look almost identical, but one can distinguish between them by the color of the flame produced when burning their crystal powder. If the flame is pale-green it is barite, and the red color of the flame is an indication of celestite. Exquisite glow and attractive blue color makes celestite one of the visually most prominent minerals.

Strontium is a chemical element that occurs quite often in nature, yet only two minerals contain enough strontium to be suitable for practical exploration. Besides celestite, the other one is strontianite, but actually only celestite is abundant enough for commercial use.

Celestite is an extraordinary crystal for mental activities. It balances yin and yang energies in the energy field of the individual. It is a stone of balance in general sense. Celestite promotes purification and improvement of the chakra. It contains inner wisdom and can help in establishing a connection to the angelic planes. It helps in astral travels and in dream recollection after waking. Placed on the third eye, it gives a sense of levitation. Celestine is a good teacher, always filled with Divine love. It leads us into deeper spiritual waters, toward the enlightenment.

As all light blue stones, celestine opens and purifies the throat chakra. It is a creative stone with calming, soothing functioning. It sharpens and focuses the mind, disperses worries and calms the mental chaos.

It should not be used alongside rock crystal, azurite, or malachite. Exposed to sun lights it loses its color. Before use, sometimes it is recommended to put celestite together with hematite for some time, so that its extensive power can be reduced.

Well I’m pretty excited about what just happened. I clicked on the "Lets Play" feature above.. and Celestine was choosen. This is pretty amazing considering what I have been searching for. If I could name 3 major problems I am dealing with.. I would say, eyes, ears and mental. And I have also been looking for the right throat chakra stone as well. Enlightenment has intrusted me for years, and the Divine love was something I was very close to, but years ago lost contact with. Really glad I came across your website only yesterday.

Hi Christopher,
We are glad you find sunnyray.org useful, and may Divine love and enlightenment never leave you and be with you constantly. There is not a single thing in the world worth it more than that.

I find celestite to be a wonderful treament for insomnia when taped to the third eye before bedtime. Much like prehnite crystals, celestite promotes lucid dreaming and dream recall I love my little celestite!!!

Thanks for your comment, and yes, Celestite is a great stone indeed. It is known to help astral travels and dream recall after waking. Yet, we believe it is much more effective when used on the throat chakra.

Looking for the history and the medicinal uses of a stone called chrysocolla, I bought a pair of earrings from a vendor in Omak wa. This stone he says rose quartz but looks very flat pink for rose quartz and a tiny snake on the earing that I thought was very unique.

It is hard to tell what the stone is, even from a quality photo. The pink color suggests rose quartz, as chrysocolla is bluish-greenish.

question: Why should celestite not be used alongside rock crystal, azurite, or malachite? What happens? Also, when you mean alongside do you mean touching directly or even in the same bowl or space?

Simply put, we find them incompatible. There are many other possible combinations that work better.

I just received celestite and I have a couple of questions. After smudge cleansing, do I need to charge my celestite or can it charge itself? If not, what is the best way to charge this fragile crystal?

As a rule, we always charge our stones - celestite included - after cleansing of any kind. One of the best way of charging celestite is exposing it for a few minutes to the gentle rays of the morning sun.

How should we use the stone to cleanse the body from bad eyes, magic, voodoo and etc?

Hi Nahim. I don't think celestite is the best stone for protection against negative influences and magic. It is better to use some of the projective stones for that purpose.

Hi,
can you advise me if it is good and usefull for health to keep a big stone of Celestine ore in my bed room and other place of my home?
How it will effect us?

Hi Farshad,
Our human electromagnetic fields (auras) are definitely affected by the presence of stones, even more so if we talk about bulky ores. Some people are fond of some minerals more than of the others. It is very individual. The best way to determine how celestite affects your environment is to try.

I'd love to purchase a piece of Celestine affordable jewellery to wear close to me. I'm having difficulty finding some? Can you help. I love your informative website. Thank you.

Yes, it is hard to find Celestine jewelry, as opposed to Celestine crystals which can be found without any problem. Here is a Celestine Pendant you can purchase online.

What is the best way to clean Celestine? I live near the ocean and I gathered some sea water. Can I submerse it? for how long? I am new to crystals and want to do what is best.

Thanks for your help! AND your GREAT site!!

Dear Arlene,
Celestine is very slightly soluble in water, so I would recommend not to use water for cleansing. Instead, smudging would be a better method. Thanks for your question.

What kinds of stones would be considered rock crystals?

Rock crystal is a crystalline material of silica type (silicon oxide). More about the properties of Rock crystals you can read here.

Hello, I'm thinking of ordering a decorative piece that consists of two small celestite spheres on top of a calcite base. Is calcite a rock crystal, and if so, would it be okay to just separate it and purify once I receive them of would it already by ruined? Thank you.

Hi Eddy,
Calcite is by no means Rock Crystal. However, it too can be cleansed with water, unlike Celestite, where water cleansing is not recommended.

I'm from South Africa and I need celestite crystals.
Its my first time to need crystals.
Can I get it in my country? And how much, and if not, how can I get them, Thanks in Advance.

Just curious about the celestite/malachite/clear quartz incompatibility ... I just received a piece of each (the cavernous celenite geode full of little bridging crystals being the largest) they have all spent a month in transit together (the quartz was a little double terminated natural wand and came as a free gift) is it possible for these crystals to harmonise? Because they all have a wonderful energy to them, I can feel the mixed energies within each and yet they don't seem disharmonious to me in any way ... if anything the malachite has added this depth to the celestite and the celestite seems to have raised the vibration of the malachite (a stone that I've often had difficulty working with as it always had a heaviness to it that my system really didn't like) ... just wondering if you could explain a little more about what it isn't usually compatible between the 2 so I can understand how mine have changed? thanks

Hi crystalausboy
The main reason is the incompatibility of their energies: I have always found it hard to harmonize their energies. Maybe in your case the prolonged time they have been together has made a difference?

I am already wearing clear quartz crystal and amethyst. I want to buy angelite, blue lace agate and celestite are these compatible with the stones I am wearing and also are they compatible with each other?

I am a natural born emath and intuitive, I've worked hard over the years to develop this blessing that was passed to me by my great great grandmother (or maybe it was the ability to open myself to what is naturally in all of us).

Intuition is a great blessing. Thanks for the comment, Piper.

Sunnyray can you tell me whether or not Celestite and Selenite are compatible? I have one of each one my desk, also near my bed.

Yes, they are pretty much compatible. They both work on the higher chakras, and are typically used for establishing angelic communication.

Hi, thanks for the crystal infomation. My question is about Celestite. What crystals can be used with Celestite to empower my Reiki transmissions? What crystals are best to use with Celestine, besides hematite? Is Rose Quartz ok?

I would use the universal crystal for such purposes: Clear Quartz.

It is September 10,2019, I referenced the date because as I go through the comments I see 2015 and I instantly thought HOW LONG HAVE I BEEN SLEEP.I feel like so much time has been wasted by me. Obviously I am new to this but I have always had a feeling something was off. The seemingly overnight urgency pulling me to Crystals, Esoteric Topix and beliefs ECT... is somewhat overwhelming. I'm not sure where to start or how to explain it to people to be able to start or better yet if anyone can explain it to me as to what is going on with me why do I feel like I have had a shift in consciousness? Am I supposed to be this confused? If the spirit moves you whomever comes across this I would greatly appreciate your help/ advice in steering me in the right direction. Thank you, Light and Love all around.