Dolomite is considered to be a rather gentle stone that brings to the owner increased mercy, unselfishness and giving in all its forms and manifestations. It promotes energetic mind, unique creative expression, and enables deeper manifestation of one's inner self. Dolomite can help in developing abilities for handling people that are extensively active.

Dolomite comes in gray, white, red, light-pink, and yellow-brown colors. It is of glassy appearance. Often can all these colors be found within the same stone, which makes it strangely beautiful and its distinctive patterns are very much memorable.

From the mineralogical point of view dolomite is a carbonate (CO3) rock which is consisted of calcium (Ca) and magnesium (Mg). It chemical formula is CaMg(CO3)2. This rock was discovered by the French explorer Dolomieu in the 18th century. The term Dolomites is also used to mark a group of mountains (a section of the Alps) in southern Tyrol. The geological origin of the dolomite is not clear up to date. The basic problem is that dolomite does not form sedimentary rocks, meaning that some time in the past there must have been a transformation from limestone (aragonite and calcite) into dolomite. The origin of magnesium and of this possible transformation in dolomite is still unknown. 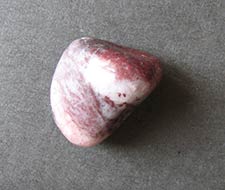 Dolomite is used as stone for ornaments, as raw material for manufacturing cement and as a source for magnesium oxide. In the horticulture it is used as a supplement to the earth to lower its level of acidity. Dolomite from some region contains considerable quantities of lead and other toxic materials.

Dolomite seals the energy leakage from the energy centers - chakras. It balances and aligns all the chakras as well, stabilizing human energies. Therefore it is of great benefit to put dolomite on several prominent spot throughout the house, alongside with some other minerals that are also used for balancing. It is an especially good stone to be around when overwhelmed with sorrow, for eliminating emotional wounds, loneliness and anxiousness. Dolomite soothes anger and excessive negative reactions. It attracts spiritual forces while purifying the soul. Dolomite strengthens the family relations, brings more joyfulness into one's life and enables better attitude towards life to individuals that are too passive. Pink dolomite is especially good against insomnia. All lighter varieties of dolomite are useful for gentle opening the heart chakra.

In the physical domain it is suitable for strengthening the bones, teeth, muscles, and female reproductive system. It protects the sweat glands and ovules, and can cure some skin diseases.

It can be discharged if placed in a container full of hematite. It should be charged in the presence of rock crystal. Dolomite should not be used for making elixirs.