Jet can be used for removal of negative energies of any kind, including negative thoughts and fears, and for protection against illness or violence. Jet is able to produce an atmosphere of peace, calm and serenity, reducing the feeling of depression. Jet awakes the kundalini energy since it corresponds primarily to the first energy center - Muladhara chakra.

Jet is referred to as "black jewel", but in essence it is of organic origin - merely a type of coal, which can be polished. Jet is a variation of one particular type of coal - lignite. If rubbed, jet gets charged. It used to be a part of many types of ancient jewelry. Jet's color can be from subtle tan to dark brown and black, but by far the most common is the black color. It possesses silky glow.

Most notable occurrences are in England, but it also comes from USA, Poland, France, Germany, Spain, India, and Russia.

Jet is a grounding and balancing mineral. Due to the fact that it can accumulate negative charge, jet is excellent for attracting knowledge and wisdom. Jet's origin can tell you much about this interesting stone - it stems from wood (buried under the ground, transformed and fossilized), and as such, jet has access to both ancient knowledge and to the transforming powers of the earth element. Jet helps in balancing the financial aspect of your life, and therefore jet should be kept in the abundance corner of your home. 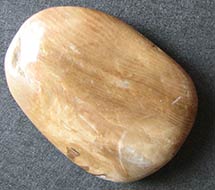 In many respects jet is on the opposite side of amber. They relate to each other like positive and negative polarities, active and passive aspects, male and female, kinetic and magnetic principles. Therefore, in order to understand the spiritual properties of jet it is important to know also the amber meaning. Jet and amber are considered to be stones of the High priestesses and High priests. In the past, this combination of powerful stones was used also by the saints and shamans.

You can carry jet around your neck for protection. It can protect you from the forces of darkness and violence on your spiritual journeys. It has been used for talismans in order to assist the person to take control over his/her own life.

Jet is an excellent stone for attracting and channeling the elemental earth force into the chosen direction. Jet neutralizes negative energies, and releases from stress if combined with lepidolite. For psychic protection and purification jet can be combined with black tourmaline or smoky quartz.

In healing, jet can be combined with amber or sugilite for cleansing the liver and kidneys. Jet can assist with headache and epilepsy. It stabilizes the mood, and promotes equilibrium

Jet should be thoroughly cleaned after every healing session. For that purposes, a stream of lukewarm water can be used. Jet should be charged for two hours together with rock crystals, or in the early morning Sun.

I enjoyed learning more about jet. I have several very old necklaces and was told the stones were jet. How can I tell for sure?

Hi kandis,
The first thing you can do is to inspect the stone visually. If the color seems right, then try to feel how heavy the stones are. Remember that jet is essentially pure carbon. Carbon is one of the lightest elements, so the stones should be rather light, as compared to quartz, or almost any other type of stone.

Give me more accurate sample of Jet Stones and how it arrives/created as such.

Hi,
Thanks for the information on Jet. I got it for a friend who has had financial difficulties.

I thought you'd be interested in the book by Diane Robbins about the Crystal Kingdom. It's here: http://www.diannerobbins.com/crystalpeople.html

Thanks for commenting and sharing the link to Diane’s book.

Thanks for the information about jet!

Thanks for reading, Amt.

Amazing. Love it. I learned more.

I use Jet when I do my meditations in combination with Moldavite. I know that this combination works great, and both stones really help me both in terms of protective energies and in terms of releasing negative mental and emotional energies.