The World – Major Arcana number 21 – connects Yesod and Malkuth, two of the lowest Sephirot on the Middle Pillar of the Kabbalistic Tree of Life. By looking at the most important aspects of Yesod (Foundation) and Malkuth (Kingdom or “the realm of our manifested world”) we can intuitively grasp the significance of this Tarot Card. It is a symbolic representation of the link or connecting path between these two Sephirot on the Tree of life. More about the intimate link that exists between tarot and symbolism you can find here.

The World Tarot Card is associated with planet Saturn and also with the Hebrew letter Tav (Tau).

The Symbolism of Major Arcana 21

This card depicts a young female figure, encircled by a giant laurel wreath. The laurel represents the Disk of Eternity, but also has been considered a symbol of Victory and Protection. The female – some sources say Anima – is standing there liberated from the shackles of matter. She represents the so-called Virgin of Eternity. In addition, there can be seen four heads in the four corners of this Major Arcana: – they represent the four fixed astrological signs: – Aquarius, represented by the Cherub in the upper left position, followed ( in a clockwise direction) by Scorpio, represented by the Eagle, Leo (the Lion) and Taurus (the Bull).

Can we think about another Tarot card where these four mythical creatures are present? Yes, we can! It is the Wheel of Fortune where we meet again these mythical figures. They stand for the four elements, or for instance, they may also represent the four sides of the world. This tells us that these two Tarot Cards (The World and The Wheel of Fortune) are indeed deeply connected to each other (see here more about this connection).

The infinity symbol is also present at the top and bottom ends of the laurel (red ribbons). The two batons in the hands of the female figure are symbols of balance, but some interpretations denote them as scrolls of knowledge.

Spiritual Meanings of The World Tarot 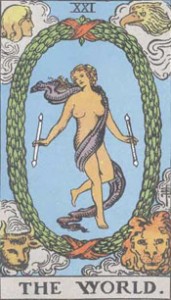 The Self has reached the true state of Unity, the unique state of psychic wholeness. I am that I am – a liberated Soul. The end is a new beginning. Yin and Yang merged in one whole.

This Major Arcana Card can be understood as representing the perfection of the Universe (Universe here interpreted as both the microcosm – the individual human being as well as the macrocosm) at the end of its cycle – at that point when it realizes its Divine nature. Furthermore it indicates the state of our inner being, where it reflects itself in the consciousness of the Divine in the moment of self realization.

This card has more than one message on the macrocosmic side. For example, it can denote the restored world when the laws of manifestation have reached the highest degree of natural perfection. Another interpretation speaks of the past, referring to the day when all was declared to be good, when the morning stars sang together and all the Sons of God shouted for joy.

Prognosis: synthesis, the end of some endeavor, persistence in one’s stubbornness, hardships, crystallization of things, successful completion, the end of the cycle of destiny, mature spirit, triumph, honor, integrity, travel, symbol of spiritual wholeness, fetus within the mother’s womb, symbol of the newborn infant ready to step into life.

In the reversed, the Major arcana XXI is thought to essentially retain all meanings, but to a lesser intensity. If we think about it, what could change if a circle (or elliptic object – the laurel wreath – for that matter) is turned upside down. Nothing really. On the other hand, every successful end, the completion of a certain stage in one’s life is followed by a certain pause, sense of void, and even inertia and stagnation. The more traditional interpretation of the World reversed indicate obstacles, failures, distractions and despair.

I like how you use the tree of life in your interpretation , it is very useful in the representation of the card, their are also a lot of Masonic symbology in the card . The man , eagle , lion and ox were the banners of the four tribes of Israel and each were posted in the four directions of the tabernacle of King Solomon and that is where the guards were posted to keep any one out that did not have permission from the king.thanks awesome post

Thanks Allen for dropping by and for sharing with your insights and thoughts on this Arcana.