When it comes to manufacturing and technology of production, the photovoltaic solar cells exploited today can be divided into three main groups:

The difference is more than evident and it can be seen in the ordering of the material on molecular level - the AM solar panels are made out of glass-like (unordered) material with no regular crystal structure. The PC solar cells are produced from materials with randomly oriented crystallites. This type of cells is positioned somewhere in the middle between the first and the third class of solar materials.

In Nature we can hardly see any mono-crystalline materials of any type. We usually encounter either amorphous or the poly crystalline forms of any substance. As a result, the third group of single crystalline SC solar panels requires manufacturing of very precisely structured crystals. This is consequently reflected on the costs of production of such solar panels. While demanding for manufacturing, the third group of solar materials has various benefits, like for instance, superior efficiency and somewhat more compact surface of the wafers for an equivalent wattage.

When considering the composition, silica based solar cells are by far the most abundant. Single-crystalline silicon (c-Si) wafers are obtained from the rough silica (SiO2) material, aslo known as quartz. After further purification and dopping, the c-Si wafers can be used as building blocks for the single crystalline solar panels. More details on the process of preparing cSi wafers can be found here. The c-Si panels have been at the forefront of solar cells technology for many years. This is mainly due to their high-performance and reliability. Most of the PV power plants today are made out of single crystalline silicon, as this type can provide up to 20 or 30% efficiency. The solar cell efficiency is an important parameter. It is described as the percentage of electric power obtained from the incident sun light normalized per area of the cell.

The poly-crystalline Si cells are considered to be a more affordable alternative to the single-crystals. Although wafers made of polycrystalline silica are generally less efficient than the c-Si ones, there are certain advantages that enable lowering the production costs. For one, they require less pure silicon and the technological process is less intensive. The downside is in the lowered efficiency, which is in the range from 11 to 15 percent. . It means that of the amount of sun energy getting to the surface of the panel there will be converted energy into electric current of up to 15 %.

The least efficient are the amorphous solar panels. However they are very versatile and can be produces to be in a form of thin films and even foils. In addition they are much less costly than the corresponding single crystalline cells, and as such they are ideal as inexpensive home solar energy solutions. 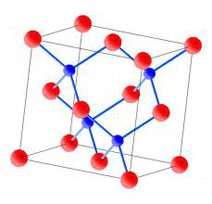 Si based solar cells are followed by cadmium telluride - CdTe, galium arsenide GaAs, indium phosphide InP, and other solar modules. Latelly, the chalcopyrite solar cells are being investigated as very promising and efficient systems. The difference is in the response to different parts of the solar spectrum. This response is a feature that can be tailored, for example, by adjusting the so-called semiconductor band gap via incorporation of different chemical elements.

In the attempt to lower the costs of the end product, one approach would be to minimize the amount of needed bulk semiconductor material. Thin films are known as quasi two dimensional (2D) systems made out of several micrometers thick surface layers. They are usually made in chemical vapour-deposition processes. Almost all semiconductors can be obtained in a form of thin layers, and thus solar cells can be, in principle, delivered as thin films. The downside is in their diminished efficiency. However, one of the bottlenecks for the wide usage of solar panels is their high cost per watt value, as compared to the other convential energy sources. This makes the low efficiency less important in the global picture, and the prime effort is put in the attempt to improve the cost per watt factor. Therefore the thin film materials along with the amorphous silicon technology are increasingly used today, in parallel with the introduction of new materials on the markets, such as CIS and other chalcopyrites.

Gregor is a nature lover and environmentalist.