In my opinion, Green Amethyst - Prasiolite is one of the most beautiful semi precious stones ever found. At the very beginning of this post I would like to talk a little bit about one controversy related to the name of this gemstone. The science of gemology considers the term "green amethyst" or "greened amethyst" a misnomer. Now if you don't know what misnomer means, it should not be difficult to find out - it means that what we often consider to be a green variation of Amethyst actually is not an Amethyst stone at all. The reason is simple - Amethyst can only be of violet color.

That is why when we talk of Prasiolite we should keep in mind that, in fact, Amethyst is something different from Green Amethst - Prasiolite. Nevertheless, when discussing this fantastic gemstone we will use all of the above names interchangeably. The two photos of lose stones below depict a natural untreated rough prasiolite and a gem quality prasiolte (second photo). 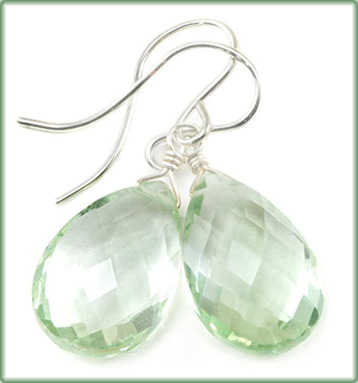 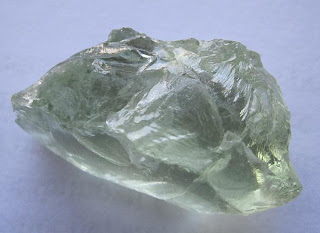 As for its physical properties, Prasiolite has hardness of 7 on the Mohs scale, which is no surprise since it belongs to the silica family. Almost all of the stones of the silica family have hardness somewhere around 7. Hardness of this degree almost always ensures relatively high durability (consider iron, for example, which has only 5 on the Mohs scale), and that indicates that your jewelry will last long. Prasiolite's color is light green, and the most desirable specimens are supposed to be transparent. It has a glassy shine and should be cleansed with water, not only in order to remove the prasiolite's surface dust, but also to purify its inner energies.

Raw green amethyst comes mostly from Bolivia and India. It should be protected against sun rays, because too long an exposure could lead to gradual loss of color. Not surprisingly prasiolite is a favorite gemstone in jewelry to be used in various combinations with other gemstones, crystals and precious metals for making astonishing adornments.


Prasiolite was discovered around 1950. The color of the newly discovered stone was very much alike the green color of beryl, tourmaline, or peridot. Some time after this discovery, greened amethyst was also found in Arizona.

As already mentioned above, the color of Amethyst is violet in various different shades. When we conduct a special heat treatment of violet amethyst, which means annealing it for some time at 400 degrees Centigrade, the result would be a change in color to yellow, and ultimately Violet Amethyst will end up with no color at all. This is a well known method of producing Citrine from Amethyst. By the way, you should be aware of that artificial way of producing Citrine, in case you are after genuine citrine jewelry.


Anyhow, during that annealing process, some particular Amethyst specimens, originating from some particular regions of the world, will show a change in color toward the greenish hues instead of transforming themselves into yellow crystals.

That unusual property has been exploited lately by the jewelry manufacturers and sellers in order to produce large quantities of artificial, i.e., synthetic variations of this mineral. Such man-made prasiolite is almost impossible to distinguish from the real, natural stones, although some sophisticated methods have been developed recently. Therefore, the only advice that can be given is to purchase this type of jewelry only from well known and trusted sources. 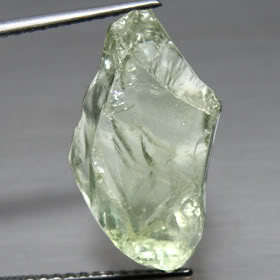 On the other hand, crystals are progressively more treated with the radiation, and in many cases this procedure also leads to change in color. For example, smoky quartz can be obtained by irradiation of ordinary transparent rock crystal. This is well known trick used by jewelry manufacturer around the world. Amethyst that has lost its color by heat treatment is also known to change back to its original violet color when irradiated. The reason for this behavior is not very well understood. It is believed that the violet color of Amethyst comes from the so called "color centers", which are special defect crystal structures that are easily manipulated by some excess of energy, as mentioned, either thermal energy or radiation.


One of the conclusions that can be made from the above considerations is not to expose your Green Amethysts jewelry to any kind of intense natural or artificial light if you want to protect the color of the samples.

Other Posts about Green Amethyst

Thanks for the nice information.

While the colour of amethyst ranges from very pale to extremely intense or even dark, it seems to me that the colour of this parsiolite stone is always pretty pale. have you seen any deep green coloured prasiolites?

Hi kate. Thanks for the interesting question. You are absolutely right. The Green amethyst stones I have ever encountered were of relatively pale color. I don't know if there are some gemstones of more intense color. It there were some, I believe they would be rather expensive too.