The Meanings of Ruby — Stone of Divine Creativity

Ruby is a stone of Divine creativity. It boosts your energy levels and promotes high self-esteem, intuition, and spiritual wisdom. Ruby is a symbol of good fortune, pure love, and loyalty. As an aphrodisiac stone, it brings vigor into your life. It is one of the most powerful red stones. It has a characteristic red color with brownish or bluish hints. The color of Ruby is the result of the presence of chromium into the crystal lattice of alumina (Al2O3) — corundum. Just one percent of chromium is enough to produce Ruby’s red color. Judging by composition only, the closest relative of Ruby is Sapphire (both are variations of the same corundum mineral).

Ruby is not a stone for people who have an impulsive nature. If you get nervous easily or if you have a short fuse, try to avoid extensive use of Ruby. Rather, you should use Ruby in Zoisite. In any case, as far as the metaphysics of Ruby goes, it should be approached with care, as this stone is able to enhance all types of emotion. This can be useful, for example, if you want to bring to the surface some suppressed emotions of anger. A piece of Ruby in one of your hands in combination with Rock crystal placed on the pelvic area can help release the accumulated anger. Rock crystal as a pure form of Quartz facilitates the process of emotional discharge. 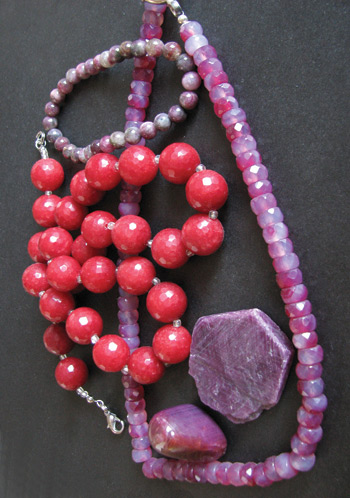 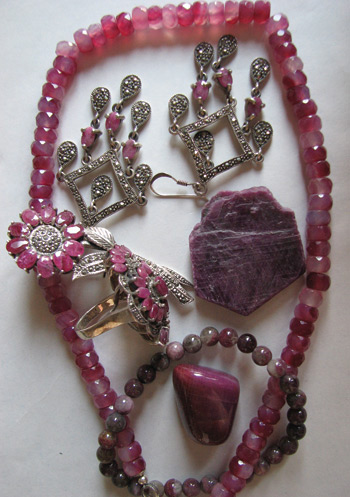 Ruby helps eliminate signs of fatigue and depression. On the other hand, it can awaken passion — not only sexual desire but passion for life, and for new experiences and creations. It stimulates your motivational forces and makes you realistic and truthful in your goals and intentions. Ruby is believed to be one of the best stones for increased sexual activity.

If you are feeling inert, if you have no imagination, or if you feel as if your imagination tends to make up wrong or unrealistic goals, Ruby can help you move forward in a positive and refreshing way. 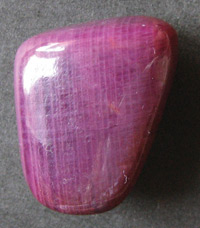 Ruby stimulates the heart and the fourth energy center, Anahata, protecting you from psychic attacks and energy vampirism directed toward the heart chakra.

In crystal therapy, Ruby is believed to stimulate the pineal gland. Ruby is therapeutic for the blood vessels; it helps the blood circulation, promotes blood cells formation, and purifies the blood and lymph. It regulates the function of the liver and spleen and stimulates the adrenal glands and kidneys.

Ruby is cleansed using running water; it can be charged in the sunlight.

My ruby is having small scratches....is it ok? Should I wear it

Hi Sushant
By all means you should wear it. Those scratches shouldn't affect its metaphysical action too much. Thanks for the comment, and God bless.

I would say the best place is your local crystal and mineral store. As for online purchasing, maybe alibaba or amazon.

Some rubies are green with small red enclosures. Do they have the same properties as described above ?

The only possible color for Rubies is red. What you refer to, in fact, could be Ruby in Fuchsite. Fuchsite is green, and it often contains some small Ruby inclusions. So the properties are those of Fuchsite and Ruby combined.

First and foremost ,this is an awesome page.I for some time have been extremely curious about crystals, Like others have also mentioned,the rose quartz and a clear crystal rock plus a n orange rock has come to my path,I was also given a bracelet as a gift from one of my students,its green,pink,clear,orange,purple,and rose colors,I just always hung on to it and didn't know why,but do you think that all this is for a reason,I do get visions and I do pray alot during the day and I also feel or absorb people's negative vibes,I do find myself exhausted at times,do I need to cleanse self?How do I do this,its funny that Epsom salt while I shower and start with positive thinking helps,any other way I can separate these negative influences with a certain prayer or ritual? Once again thank you for reading.

Thanks a lot Blanca for sharing your experiences about using crystals. It's definitely happening for a reason. Especially if you are spiritual, if you are open toward the higher realms. You need protection, and crystals can offer you a great deal of protection. You definitely need to cleanse yourself, and your crystals that you use in your work too. Yes, cleansing by using salt works very well, and also while showering. Positive thinking, visualization and imagination is also one of the ways to do cleansing. Check this page for more on cleansing crystals. Many crystal blessings!

Can a person with depression wear RUBY EARINGS.

Hi Samir. Sure, they can. As a stone full with energy and passion, Ruby might help with some mild forms of depression.

Sir, I'm interested to wearing Ruby stone and I'm with rashi Leo. rite now I'm looking for Government jobs. Ruby wearing is helpful for us please clarify ??? My DOB is 07.10.1988 6.25AM

Hi, i m presently wearing a ruby in ring finger of my left hand. As at present i m a student and want to go further higher studies for government jobs. Wanna confirm that is wearing ruby in left hand is correct as i m not getting any positive result even after wearing this

Nice information about Ruby thanks for sharing this information........

Hi, i was wonderig can I wear Ruby. My Sun is in scorpio, asc in Leo and moon in aquarius? Is Ruby good for that? Thanks.

In principle, all Zodiac signs can wear Ruby. That said, Ruby's energy can be a bit too overwhelming for some people. That's why, I suggest to go slow with it and see how your body reacts.

Don't "bless" people. There are no gods to do that. Try to be a little more scientific!

Hi sunnyray, nice thoughts on ruby. I just recently bought an opaque ruby. It is not bright red rather with hints of white and brownish color. Basically, it's a low grade ruby. Does it have the same benefits you mentioned above. Same metaphysical? Thank you for your response in advance.

Hi Ian. Most of my Rubies are similar to yours, and I can feel their metaphysical energy regardless of their low grade. It is very dificult to find untreated transparent rubies, especially for a reasonable amount of money, so we have to live with what we can get. Thanks for the comment.

It's ok to bless people if you wish. God bless you in your journey!

Thanks! God bless you too Saloli!

I am wearing Ruby on the ring finger of right hand as seen in many websites.Being a woman will it cause any problem? Asking because many websites say it should be on left hand for women. Please reply.

I which i had a ruby