This Tarot card connects Chesed and Tiferet – two Sephirot on the Kabbalistic Tree of Life. Considering the Zodiac, the astrological sign assigned to the Hermit Tarot Card is Virgo. We can almost say that by looking at this card, and if we do that with an open mind, we can get an instant insight into the nature of the Virgo sign. The Hermit is rightfully considered a prototype of Virgo.

Here are some general characteristics of this card. Among the 22 Major Arcanas, the Hermit is associated with the number 9. The letter Yod from the Hebrew aleph-bet is also assigned to it. The elemental power of the Hermit Tarot Card is expressed through the &ldquoteearth&rdquote element. 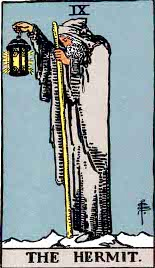 In almost all of the representations (decks) of Tarot, this card shows a Hermit with a lantern. The Rider-Waite deck depicts a hermit figure turned to the side, so that one cannot quite see the hermit’s face. His bearded head is slightly bent, as if showing a desire to leave the world of the senses and focus on the inner, psychic side. There are two dominant symbols – a long stick in one hand and a lantern in the other.

The light that comes out from the lantern originates from a six pointed star. This is the familiar Hebrew &ldquoteStar of David&rdquote (read more on the symbolism of this star).

The staff symbol is a common accessory in the world of pilgrims and saints. It is a token of power and authority. It is also a symbol of hermit’s spiritual path towards the more spiritual levels of consciousness.

The meanings of Arcana nr. 9 are not always clear nor consistent amongst the greatest tarot authorities.

The light of the lantern is possibly the light of intuition. The earth element (clearly seen here as the mountains upon which the hermit is standing) denotes the material world of the senses, the high levels of achievements, and the necessary patience.

The Hermit is speechless. His task is to shine and illumine the dormant human hearts. The whole array of pain and difficulties are already beneath his feet. He stands above all that is human, holding his lantern high and showing the way to those willing to follow him. That is, if the person is positive and balanced.

In the negative aspect, this card might express loneliness, mystery and secrecy. Individuals where the expressions of The Hermite’s downside is dominant are usually kept apart and above the other people.

This card may signify a period in your life when you are engaged in personal development, that is, seeking the truth or soul searching. Are you looking for a deeper meaning in your life? If you are, know that this is a lonely quest and that the Hermit tarot card signifies time of solitude and separation. Meditation, introspection, and contemplation are mostly done in solitude, especially if you are just beginning with these types of activities.

The other aspect of this card has to do with your desire to turn your attention away from the materialistic goals in life. Search for all the answers inside of you, rather than trying to satisfy the superficial desires of the senses. Some answers can only come from within, in the solitude of your True Self. The Hermit can help you learn to cherish Its wisdom.

The figure on the hermit is so positioned, as to resemble the Hebrew letter Yod (see bellow). 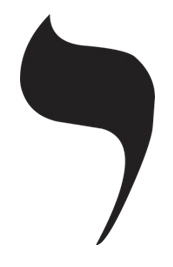 The Hermit can be seen as the Jung’s Wise old man archetype.

The Hermit in Prognosis

Main keywords to think about: inner enlightenment, secret impulses from inside, retreat from everyday life, seeking knowledge apart from the traditional places.

According to Richard Gardner, author of the book Evolution Through the Tarot, this card is a sign of wisdom, knowledge, caution, obstacles (the caution prevents things from happening), missed opportunities, withdrawal into oneself, and so on.

Waite, on the other hand, disputes the understanding of this card as a wise man in search of truth, and instead emphasizes that the hermit is merely showing the way to those willing to follow.

The Hermit Tarot is a very spiritual card, even if reversed. It can indicate some sort of spiritual or metaphysical affairs with various organizations and institutions. It might be an indication that you should go on with your life without too much thinking, rather than being focused on finding the truth.

One interesting interpretation of the reverse position of the Hermit, is that it might be seen as a hidden Persephone — queen goddess of the underworld

who carries into effect the curses of men upon the souls of the dead, along with her husband Hades.

In conclusion, we have talked about the symbolism and meanings of the Major Arcana number 9. As it is always the case with Tarot, we can only indicate the possible interpretations; it is up to the reader to follow his or her intuition and discover the true meaning in the given situation.

The Hermit Card in Meditation

You can meditate of this tarot card if you want to connect to Hermit's infinite and ethereal state of consciousness. This state enables seeking deep insights and spiritual knowledge. It's the kind of knowledge that instead of factual information brings true understanding of things as they are. It's a form of deep self-discovery. This soul searching is a solitary mission, unique to you, me, and any other person. It cannot be done for us by someone else. In meditation, the lantern in his hand symbolizes the light of the collective unconsciousness, which after the successful meditation becomes collective consciousness that connects all people.

What Type of Personality Denotes This Card?

The Hermit is someone who has transcended their actual age. They are wise and experienced, spiritual teachers, mentors, and guides for others. With their lantern, they light up the path to the other people. This personality type spends a lot of time in companionless contemplation, but they seldom feel alone. They need not always reflect. They may spend their solitary time reading, writing a novel, or doing a hard work. On the negative side, these people may be overly critical, with harsh critique on themselves. As they seen details with high accuracy, they often miss the big picture.

The Meaning of the Hermit in Love and Relationship

This is a puzzling card when you get it in a reading involving love and relationships. The reason is obvious: the Hermit is a lonely card by definition. He goes within to seek for secret knowledge and spiritual insight. The Hermit doesn't want to share this knowledge with others. Therefore, it's a pretty self-oriented card in any relationship readings.

That said, the outcome may depend on the surrounding cards. In many cases, the Hermit has only brief contacts with other people, so the other side should be able and willing not to be in the spotlight all the time.

If you are already in a relationship, it could still be a positive card. For example, if both parties are willing to spend time together, but in a state of solitary introspection, shutting out the world around them.

If you are seeking for romance or love and you have someone in mind, this card could mean spending some time in contemplation to see if you really want to move forward with it. If you decide to move forward, it means that you're going to transcended this card, because there's no Hermit in a love relationship.

This card could also mean taking a break from a superficial relationship or constant dating.

Hermit in a reading related to health could mean several things. Most likely, the need to take time to rest and recuperate. More rarely it could mean isolation due to contagious conditions. The Hermit card could also suggest age related health problems.

The Virgo astrological sign is connected to this card very deeply. This too could indicate taking time to rest from the chronic stress of your daily life, finding your own inner balance, reflecting on your mental and emotional health, going on a vacation, or caring for your own needs.

In Career and Finances Readings

The Hermit tarot card in career readings could mean that you're getting nowhere with your business. In fact no other tarot card screams out "being unemployed" more than this one. So you have to consider this when you interpret the outcome. Or it could mean taking time to reflect on your true life purpose and adjust your job and career accordingly.

The Hermit and the Other Cards

The Hermit and Judgement

The Hermit is self-oriented and on a spiritual journey. Judgement is also looking within to judge one's actions. The judgement of the Judgement card is a form of seeking to renew some old aspects of oneself. Therefore, it is about rising above the mistakes of the past. Both card denote inner, not outward action. So, both together, they can only mean excessive contemplation.

The Hermit and Justice

These two cards have a common note. Justice means being balanced and composed, and the Hermit is straight on the pat of soul searching. So they both indicate having a sensible and thoughtful perspective over one's life.


The Hermit and Strength

Here we are having two cards that can help in a time of trouble. Strength means having strong character and determination and the Hermit has the strength to reflect on the current situation with precision and insight. So here we have a combination of inner contemplation and focused outer action.