The Moon Tarot connects Netzach and Malkuth – two lower Sephiroth on the Tree of Life. It corresponds to the water element.

This card speaks about several important aspects: about intuition and illusion, about how to cope when being overwhelmed by emotions, and about cleaning the mistakes from the past.

Basic elements of this Tarot Card are:

The Moon Tarot is Arcana number eighteen. Number XVII is The Star, while No. XIX is the Sun Tarot Card.  It depicts a mysterious night-time scene, so we can say that this tarot card stands for the midnight time and all the strange things one can encounter then. On the more positive side, we can imagine the possibility of artistic expression and divinity concealed in the night. 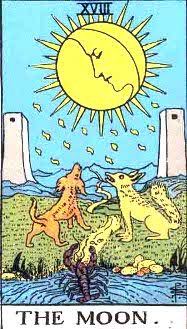 There are 32 rays emerging from the moon, 16 of which are more dominant. According to the teaching of the Kabbalah, the world has been created by 32 ways and there are 32 mysterious paths of wisdom. Indeed, if we add the number of paths on the Tree of life – 22 – to the number of Sephiroth – 10 – we get the number 32. Between the two towers we see a path that leads into the unknown. There is no clear guidance – only the reflected light of the moon can serve as a guiding aid. The fears of the mind when facing the unknown are depicted via the two animals: the dog and the wolf.

The Moon can also be understood as a symbol of witchcraft and wizardry (indicated via the symbol of waning moon).

Some Tarot readers may find here the symbolism of the the dark night of the soul. According to some sources, this tarot card is a metaphor of the desolation and difficulties that the spiritual seeker meets on the path of spiritual enlightenment. Carl Gustav Jung, the famous Swiss psychiatrist and spiritual explorer of the inner ways of the soul, often compared this psychological state to the state where a person is facing the inner “Shadow”. In this psychological state, according to Jung, we retrieve the naive projections that used to shape our reality and our character in the past, recognize them, and grasp their meanings. By doing so, we release our psychological content. This is our lifting the veils of illusion, and facing the shadow of our misconceptions, wrong ideas, and prejudices. We all have our shadows. The less we are aware of it, the more potent and dangerous it is. This shadow is part of the suppressed, unconscious regions of our ego being – expressed via the negative emotions that we sometimes project on other people.

The message of the Arcana No. 18 is that only by attaining peace, we will be able to control our lower, animal nature and be ready to step on the path of the unknown.

In readings, The Moon Tarot can represent illusion, deception, confusion, hysteria, even madness. It can also mean crisis, mistake, delay, jealousy, and cunning.

To understand this card, we have to consider that the Moon has two phases, waning and waxing. In the waxing phase, our personal growth is promoted, but in the waning phase, we feel hindrance and distractions. Our life, likewise, has its ups and downs. Knowing what influences our lives, either in a positive or negative way, is crucial to keep us on the path of personal growth and abundance.

The light of the Moon can guide is into the hidden and mysterious realms that are also a part of our life. It can bring a feeling of great pleasure and inspiration. Yet, many people are scared of the Moon. For them, the Moon tarot card can mean problems related to fear and anxiety. There is also the illusive nature of the Moon that one has to consider. Sometimes the querer might be under the influence of deceit, or wrong ideas.