Alternative names of this card are “Daughter of the Firmament” and “Dweller between the Waters”. This card corresponds to the path that connects Netzach and Yesod on the Kabbalistic tree of life. We can also attribute to this card the Hebrew letter Hey (ה) and the symbolic image 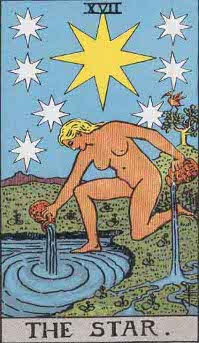 The Star tarot card can be associated to persons of elevated spirit that possess artistic abilities and desires to help others. If we observe this card (in the Rider Waite Deck) carefully, we can notice that the female figure depicted is very much aware of herself. She is a beautiful, totally naked girl. Her right foot is put upon the water of the pool, while her left knee is on the ground. The body posture is modest and humble. She holds two water urns. The water that falls on the ground nourishes the life in every earthly seed. The water that goes back into the pool is purified water – one that cleanses and recharges the very essence of the water element.

The pool symbolizes the subconscious mind, the land is, naturally, the material world, while the girl is in charge of restoring the vital force in both. The water urns indicate the unity between the water and earth element. The Star indicates renewed hope, new discoveries and inspiration.

The female depicted in the card knows very well what she is supposed to do, but, in a way, she is unaware of what is happening around her. The key to understanding the meaning of this tarot card lies in the awareness of our immediate environment – especially in the awareness of the needs and desires of other people in our life.

The kneeling figure, one could say, redistributes the material of the psyche, separating the personal from the transpersonal. The suppressed aspects of the psyche are now being released; they come to the ground and start to function on a realistic way. Psychologically, one could argue that here we see the Anima – the archetypal female part of our soul.

There is a line of thinking that connects the female depicted on the Star tarot with goddess Nuit. Instead of being depicted merely as the firmament, Nut, or Nuit, who in the Egyptian mythology was the goddess of the sky, in this tarot card takes a human form. She pours out the main characteristic of her nature – her eternal waters of love and the gifts of the Spirit – thereby signifying the process of constant renewal of life and the limitless possibilities of the existence.

Yet another interpretation says that what we see in this tarot card is actually the Great Mother of the Kabbalistic Sephirot Binah – a representation of the profound understanding of everything.

There is a huge, brilliant, eight-pointed star depicted in the upper part of this card. It is surrounded by seven smaller start, each of them also having 8 rays. The 8 pointed star is a religious symbol of redemption and regeneration. This star is also a reoccurring symbol in Islamic art, as well as a part of Masonic symbolism. It can be argued that Blazing Star of the Freemasons is not the usual five-pointed star, but the 8-pointed star. In the mystical sense, the star is the sign of the spirit. It is our mystical center and our true destiny. It tells us to be optimistic and positive, no matter what’s going on. The star is a symbol of the pure spiritual love that awaits us on the end of our journey.

Divination and The Star Tarot

The divinatory meaning of “The Star” tarot is hope, unexpected help, clarity of vision, realization and possibility of attaining spiritual insights. The keywords related to this card are spirituality, hope, inspiration, and peace. The influence of the star is always positive. As time passes by, we, much like the stars on the night sky, are getting stronger and more brilliant. This tarot card could indicate that the current period has a rich variety of great possibilities that we are not aware of. The Star tarot card could mean that our optimism is justified and that we should believe in our dreams.

Overall, this card symbolizes the possibility of expanding the consciousness to a new, higher level. It indicates that our final goal is in sight, but it will take some time until we reach it. It tells us that we need to be patient and focused if we want to realize our destiny. New, brighter future filled with greater and brighter light, is at hand, In general, this is a card that promises success in all professions related to the public. Be constructive and determined, but also compassionate and your consistent effort will be rewarded.

The reversed meaning of this card is error in judgment, disappointment, false hope and waiting for better times. Some people argue that even upside down, this card signifies favorable outcomes, provided that we keep our focus and clarity. Progress is only possible if we are active – just waiting for something to happen without any actions will not yield the desired result.

If The Star reverses, actions are needed to ward off undesired influences on our current path. These actions can be anything from breaking up from an unhealthy relationship or leaving your current job to small adjustments that you can do seamlessly and without much effort.

The Star in Love and Relationships

While being a beneficial tarot card, the Star often implies unpredictable actions. The light of the star amid the dark night signifies that your clueless searching is coming to an end. If you've been searching for love, you are likely to find the perfect person you've dreamed about.

Our past relationships often tell us a lot about what we want and what we don't want from our partner. So, every relationshiop is a lesson. But when the star of this card shines on you, your perfect partner will be able to find you. This is the most important love gift of this card.

If you are already in a relationship, this tarot card indicates a positive surprise, an increase of material abundance or emotional satisfaction.

do you think that maybe the star could mean a possible reunion after a break up? i did a tarot reading about me and my ex and the wheel of fortune was placed between us and the outcome of my question (if we will be together again) was the star.

Hi konstantina
Thanks for the comment. I don't think the star tarot can answer a specific question. It is not the type of card that can say anything about an outcome. Rather, it raises new questions, maybe questions you have forgotten being occupied with everyday worldly problems. It also may signify the need to reflect, to take time to reconsider where you are and where you want to be in the future. As for the Wheel of fortune with regard to love and relationship, check this post.

Tarot reading is fake, but the cards are still neat