The Key to Correct Breathing

The secret science of Breathing, Swara Sastra, was first revealed to Parvati by Siva who taught Hatha Yoga also to her. Swara Sastra is a supplement to, but not a substitute for the Science of Prana Yama which forms the fourth Anga or part of Astanga Yoga Sadhana.

When God created man, He has set up a mechanism or apparatus within him, which if rightly and scientifically handled will make man immune to disease, prevent economic failure and ward off sorrow and agony of defeat and frustration.

If we cannot find out and make use of this mechanism within us, we shall be complete wrecks in our lives in every respect, whether in physical well-being or economic advantage.

Disappointment and defeat lead to disease and despondency. The knowledge and application of this secret science of Breathing is an insurance against failure, disappointment, disease and misery and a guarantee of success and happiness. Its application gives practical and tangible results. You will be astonished at the inexorable precision, surety and inevitability of the results. I shall only deal with this science as it applies to every day life from an intensely utilitarian point of view.

To have complete knowledge of Swara Sastra, we should be well versed in the laws of Respiration.

To deal with respiration in all its aspects in detail is not our purpose here. For healthy living, many modes of breathing have been prescribed from time to time by the ancient Rishies as well as the modern physical culturists.

Some essentials are given below.

Cultivation of correct posture so as to keep the lungs at their fullest capacity is the first desideratum of a healthy and successful life. While walking or sitting or singing or talking, keep your thorax straight and erect without bending or crouching. This posture keeps the lung capacity at its maximum. You will gain self-confidence and get over your inferiority complex.

Vigorous walking and running strengthens the intercostal muscles and develop your breathing power on which perhaps your purchasing power also depends to a large extent. There are special exercises for increasing the lung capacity.

Among Yoga Asanas we have Salabha, Mayura, Thada and Uddyiana Bandha which greatly increase the lung capacity with the minimum of expenditure of energy.

The cavity of the thorax in which the lungs are enveloped may be increased in two ways,

The respiration in which the ribs and the sternum play a greater part than the diaphragm is termed as Costal Respiration.

The respiration in which the diaphragm plays a greater part than the ribs is termed as Diaphragmatic Respiration.

How to Practice Diaphragmatic Respiration

It is very simple and easy provided you are determined to improve your voice out of all recognition. Lie on your back in your easy chair in the hot noon, maybe in your bar room or in your own room. Lie on your back on your bed when you retire after your day's toil. Take steady and long drawn breaths by pressing your diaphragm right down into your abdomen making it bulge. Exhale slowly. Repeat the exercise ten times at the start, increase the number gradually by adding two per day.

You will be lulled into a sweet sleep. It cures your insomnia also incidentally. You will have good digestion, for the diaphragm gives a gentle massage to the viscera. It also cures constipation. After a few day's practice diaphragmatic respiration becomes a habit with you.

You also make it a point to take full deep breaths before you begin to speak or argue or sing and take full breaths when you pause and never completely empty your lungs. Keep them refilled again and again.

This stands on a higher pedestal than the above mentioned modes of respiration. Pranayama is not a breathing exercise. Through Pranayama the individual controls the all-pervading Vital Force.

Retention and control of prana or life breath promotes mental equilibrium and spiritual equanimity leading to the yogic states of dharana, dhyana and samadhi (enlightenment). The eight kinds of Kumbaka Pranayama may be mentioned here to I arouse the readers curiosity.

The aspirant may practice any one of these as a preliminary step for purification of Nadies leading him to the advanced Prana Yama consisting of Puraka (Inhalation) Kumbaka (Retention) and Recheka(Exhalation) in the time ratio of 1:3:2.

For detailed instructions and guidance, the reader may do well to read Swami Vivekananda's Raja Yoga and Sivananda's Yoga Asanas Section, or get oneself initiated by a Guru.

Coming to Swara Sastra proper, it deals with the science of breathing from a different angle. You are blessed with a nose having two nostrils. You will be surprised if I tell you that you are not using both of your nostrils always in your ordinary respiration. You may be breathing through your left nostril for some time, through your right nostril for some time or through both of your nostrils on some rare occasions. You can become aware of this fact, if you close one of your nostrils.

In the same way you can find out if you are breathing through both of your nostrils. Many eminent doctors have betrayed their ignorance of these phenomena in respiration.

Swami Sivananda defines Nadies as Astral tubes that carry Prana currents. They cannot be seen by the naked eye. They are not ordinary nerves, arteries and veins. There are 72,000 Nadies. Ida, Pingala, Sushumna are the three nadies lying along the spinal column, Sushumna or the Brahma Nadi running in the middle, Ida and Pingala lying on either side of it.

The respiration currents drawn in through the nose pass along these nadies, Ida, Pingala and Sushumna according as they are drown through the left or right or both nostrils. 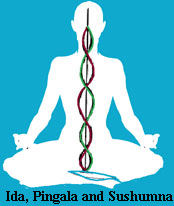 How to find out which Nadi is playing

The Laws of Ida and pingala

These Nadies do not play arbitrarily without any role or rhyme. Just as the Ocean has its ebb and tide so also these nadies have their ebb and tide. The Seas dance in delight in the full moon.

Inscrutable are the ways of God. The Nadies have their time table and work like a clock according to the following laws

I have analyzed, rearranged and reshaped it so as to make it applicable to Man's actions in the ordinary business of life. I have not however tried to give any rationale in terms of our modern knowledge. The test of the pudding is in the eating. The test of this science is in the acting. You can gradually build up your faith in this science by testing its laws by the logic of your own experience.

A. S. RANGACHARYA, The author is an ardent student of Yoga Sadhana in all its aspects.

The above guest post is published on this website based on the premise that it will be helpful and informative. The opinions made within it are those of the author and not of sunnyray.org. The links you may find within this post do not necessarily imply our recommendation or endorsement of the views expressed within them.