Major Arcana Card nr. 12 is the Hanged Man. Metaphysically, this card represents the Path on the Tree of Life connecting two Sephiroth – Gevurah and Hod. Gevurah corresponds to the level of severity, while Hod means splendor. Earlier, we have considered some aspects of the link between the Major Arcana Cards and Kabbalah. These very different attributes of the two Sephiroth already indicate the internal conflict present in this Tarot card.

This Arcana depicts a male figure hanging upside down from a wooden frame resembling gallows. The figure — without any visible signs of suffering — is hanging by his right foot while his left leg forms a cross with respect to the other leg he is suspended by. The gallows is made out of living wood, which is indicated by the leaves on it. The person can even be seen as having an expression of delight on his face. 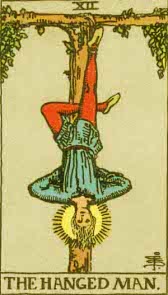 The significance of this card was not so clear, even to the greatest experts of Tarot. This is what Arthur Waite said in his must read reference book, The Pictorial Key to the Tarot:

“It has been called falsely a card of martyrdom, a card a of prudence, a card of the Great Work, a card of duty; but we may exhaust all published interpretations and find only vanity. I will say very simply on my own part that it expresses the relation, in one of its aspects, between the Divine and the Universe.”

(The web version of the above book is available for free here, or if you prefer the paper issue, you can find it at Amazon.com here)

Some of the other meanings this card can be the following:

Major Arcana number 12 is related to the ultimate fate of the seeker. The seeker has to pass the test of courage and faith: (i) courage to sacrifice the things dear to his conscious self, while at the same time controlling the instinctive desires of his shadow, and (ii) faith in the existence of Higher Self that transcends his conscious cognition. By descending into our own subconscious mind, the conscious self is put into a seemingly dangerous position — it appears it has to negate its own existence. The seeker hangs suspended on the treads of his own faith. The torture has been transformed into ecstasy, freedom from desires. In order to succeed one should subject oneself to the law of God, not to the human laws. It takes courage and faith in God. At the end, the reward is peace of heart and mind.

In readings, this card can represent sacrifice, punishment, loss, defeat, individual failure. It can also represent the forces of individual belief which are opposing the general view. Even though some situations are turned upside down, they are stable and secure. Note the light of knowledge around the head of the hanged man. The tree is alive – it is a symbol of growth and development in life.

The key of this Tarot card can be formulated like this: the individual freedom of mind and action never comes from conflict and fight, but from stability and harmony.

In conclusion, the Major Arcana Card number 12 carries a strong symbolism of resurrection after previously renouncing the instinctive nature of the shadowy part of our nature. The person in the card does nothing, but being patient and gathering inner power. The ability to transcend the pain and struggle into realization of the ecstatic nature of the inner Higher Self is a strong message of this Tarot Card.