If you are a beginner in Tarot, there are usually two “tarot related” dilemmas, regardless of whether you want to start using Tarot cards as a personal development tool or you want to do some readings and divination. These questions can be formulated something along these lines:

Where to Buy Tarot Cards?

What Tarot Deck is Right For Me?

The first question is easy to answer in a straightforward manner — I can imagine no better place than the Amazon online store. The quality of their products, customer service and speed of delivery are well known among the millions of their customers. That’s why, in addition to the amazing range of (tarot) products, I simply enjoy buying from Amazon.com.

Many years ago I actually made my first online purchase from their site. I’ve compared the prices and made up my mind to buy for them. It was actually the same tarot deck I am going to recommend to your below. Furthermore, it was my very first purchase using the internet. After a while, I stopped buying my tarot decks offline altogether. In most of the cases I found them to be cheaper online.

The second question is slightly more complicated, but still fairly easy to answer. If you are a beginner in Tarot, and if you are looking for your first tarot deck — look no further. To spare you from reading the rest of the story if you are in a hurry, here is the straight answer: 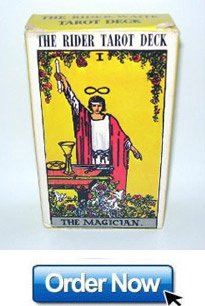 Why This Particular Deck?

Rider-Waite is very suitable for the beginners, among the other things because the great majority of books dedicated to this subject use precisely this set of cards as showcase to explain the symbolism and meanings of the tarot. Even if you are already experienced in Tarot, the Rider-Waite Deck is invaluable. If it is not part of you tarot deck collection, it would be my first recommendation. I can bet that the majority of tarot experts or veteran readers would also recommend the same deck. With a fairly good certainty I can predict that you too, after many years of participating in the tarot community, reading tarot, and after using several dozens of different decks, would gladly get back to the Rider-Waite Tarot as one of your favorites.

Apart from the above, the Rider-Waite tarot is by far the most popular of all the decks used in the English-speaking countries. Almost in every other movie or TV show where the plot evolves around some divination or tarot reading, you will be able to see the familiar faces and scenes of this Tarot Deck. By contrast, in the Latin world the Tarot de Marseille holds the top of the list of popular Tarot packs.

The dimensions of the cards in this deck are 4.9 x 2.9 x 1.2 inches. So, it is a pocket edition. That means that they are just slightly smaller than the typical poker deck we are all familiar with. This also makes them perfect for travel and everyday use.

If you prefer to have larger cards you could purchase this deck instead. The tarot cards are larger, measuring 6 x 5.2 x 1.4 inches, and they make more sense, for instance, if you plan to use these tarot cards in fortune telling seances.

Who Invented this Deck?

Arthur Edward Waite is the co-creator of this popular tarot set of cards, first published at the beginning of the 20th century. He was a mystic and scholar deeply involved in numerous branches of Western esotericism, such as Kabbalah, alchemy and divination. Today, he is also well known for his book — The Pictorial Key to the Tarot — a guide into tarot reading. You can read the entire book online or purchase it in a paperback form. The illustrations of the cards of this deck were done by Pamela Colman Smith under the instructions of A. E. Waite.

The Symbolism of This Deck 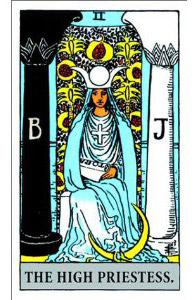 Let us see how we can understand the appeal of this deck in terms of its metaphysical meaning and symbolism, and what our rationale behind our choice actually is.

Some people would insist that this deck is mostly Christian in its symbolism, primarily because of its Hebrew (Kabbalistic) signs. I do not quite agree with that statement and I believe the symbolic representations inscribed there are indeed universal and suit the most general audience possible.

All in all, this deck has passed the test of time and has proven over and over again its value. Not only that – it has almost reached the level where we can say – yes the Rider Waite deck is the archetype of tarot itself.

What Can You Expect to Get?

When purchasing tarot cards many people expect to get a tool of divination. And, that’s true. With little practice and a couple of lessons about tarot spreads and how to work with them you will be able to do precisely that. But I believe tarot is more than readings and divination. It is above all a tool capable of helping you on your journey of self discovery. If used properly, the tarot’s symbolism will help you investigate the depths of your own soul, your own inner self.

What Other Decks Can You Explore?

There’s certainly nothing wrong if you decide right at the beginning to look for other decks as well. The Egyptian tarot, Nefertari’s Tarot, or The Halloween Tarot, for example, are good if you like exploring some completely different regions of time and space. The Universal Tarot of Marseille is another first-class and very popular tarot deck. However, I think all these different decks might not have enough of the magical appeal and symbolic depth of the Waite’s deck, and should be recommended only as second, or third set of tarot cards.

What others are saying?

Here are some observations of people who actually bought this tarot set from Amazon.com:

What should I expect to pay?

This tarot deck is really very affordable. The Rider Waite tarot deck is for sale on numerous online stores, but you shouldn’t be paying more than $20 or $30 for it. The price depends also on the actual size. The cheapest I have found was on Amazon.com, but you should check the current price of this deck on their and other websites as well.

Hi, I've "lost" one of my cards (I left it at a clients house) and I need a replacement, I cant bear to replace my pack as they are a part of my soul, my life , my being. Is there anywhere you know that I can buy or replace a missing card. I'm sure the pack is a Ryder Waite Swiss pack. 30 years old at least. I am living in England. The card is the Empress.

Please …can you help.

May peace and love be always in your heart. Lesley

I am very sorry to hear you’ve lost one of your Tarot cards. Sorry, but I am not aware of a store where you can buy individual cards. The only option seems to be purchasing the whole deck again, just to replace the missing card.

Nothing happens without a reason, though, and that one card missing is not a coincidence. Could you think of a reason why? Could it be that you are supposed to visit that client of yours once again? With Love and Light, Pythia.

I once (mid 90′s) very rudely shrugged of an English lady named Christine (A divorcee married to a Chinese individual) from Gillingham, Kent who wanted to read me the tarot cards. I very sincerely want to apologise for my conduct. Can anyone help?

In addition, I know that there are tarot cards based on Hindu mythology. Any suggestions as to what is this pack called and where can I purchase a set from? I thank you for your assistance on both accounts

I am sure that your sincere desire to apologize is enough. Deep down in our hearts we are all connected, and if you have truly repented the other person’s Higher Self will know and forgive.

As for the Hindu based tarot, I don’t know of a full 78 cards deck, but there are some beautiful sets of cards:

With love and light,
Pythia

I have a tarot deck I had an accident with it. My juice spilled over half of the cards. I let them dry but is it ok to use them now.

Hi firebran
Sorry to hear about that. I would suggest buying a new deck. Btw, what type of deck was it?