Jnana - The Yoga of True Knowledge

This article is adapted and shortened from the original talk by the famous Indian mystic, yogi and spiritual leader Swami Vivekananda. After all, who better to turn to when exploring the meanings and fundamentals of Jnana yoga. Swami Vivekananda was a student of Sri Ramakrishna, one of the most famous mystics of 19th-century India.

Jnana means knowledge and the word is derived from the root Jna, which means “to know”. So Jnana-Yoga is a type of Yoga realized by means of true knowledge.

The Objectives of Jnana Yoga

Swami Vivekananda teaches that one of the main objectives of the Jnana-Yoga is freedom - freedom from our imperfect nature, from the bondage which is deeply ingrained within our existence. It is the law of cause and effect that binds the whole universe. That’s why every cause leads to an effect, both in the inner and the outer world.

This causality is the basic of what is known as Karma. Karma is nothing else but the Law of Cause and Effect - Action and Reaction.

Everyone reaps what they themselves have sown. All potential distress or discomfort under which we suffer, all bondages under which we struggle, have been caused by our own deeds in the past.

People would like to believe that there is a mysterious force at work called fate. But there is no such thing as fate, simply because our previous actions (that is our Karma) define our present life.

The core of the teaching of Jnana Yoga is to show people how to correct this past Karma and how to cut away the karmic bondages. 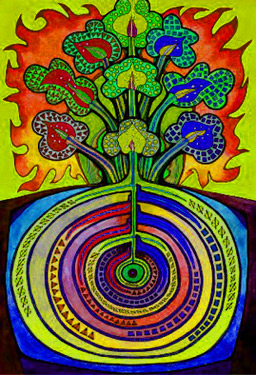 Because the main cause of the bondage we all experience to a greater or lesser extent is ignorance, we should learn how to acquire true knowledge about the world that surrounds us and about our fellow man.

However, if by knowledge you consider the usual gathering of information about all sorts of things, this is not what Jnana Yoga is all about.

Jnana Yoga is a way of realizing our true nature by means of true knowledge about ourselves. “ Know thyself. ” Know what you are, who you are and what your true nature is. If you can become more conscious of that infinite nature within your bondages will be released.

The more we “ know ourselves”, the more become conscious of our own Self, the more we manifest our inner power, and eventually our bonds break and we become free.

So Yoga, as a broad spiritual discipline, can help us know ourselves by means of different techniques. Jnana Yoga, however, uses pure intellectual reasoning which is elevated to the level of spiritual perception.

The Power of True Rational Thought

If you decide to follow this branch of Yoga, know that Jnana Yoga does not require faith. As a first step of Jnana, you are allowed to disbelieve everything, follow your rational powers and see where they are leading you.

Why is it so difficult to reason the right way? Simply because we are all bound to all sorts of superstitions and prejudices - personal, professional, inherited from family, race or nation, or due to previous education, sex or who knows what.

And when our reasoning confronts our ideals, our unjustified beliefs, or our deeply rooted prejudices we shout - stop there! No more of it. That’s no Jnana, and that’s no Jnani (the seeker who practices Jnana). Other branches of Yoga, such as Raja, or Karma or Bhakti Yoga could be more suitable, but no Jnana.

Jnana Yoga is a very tough method of spiritual development. It can be followed only by the most determined people.

Jnana Yoga Seeks For The Truth

One of the first obstacles to following the reason is the difficulty of going for the truth. Do you really want to find the truth? Is Truth your religion regardless of all difficulties? And do you still care for the enjoyment of the senses?

The first step toward knowledge is non attachment. If you are capable to turn away from the world of senses, you are naturally taken back to God.

Many people possess a natural desire to satisfy their selfish enjoyment in this life, but what is the true purpose of life? Enjoyment or knowledge? Enjoyment is just one side of things - the other is suffering. True knowledge, on the other hand, is the real goal and true pleasure one can get.

What does Jnana Yoga says about living within a great civilization? It does not mean to pursue the pleasures of the senses, to store material wealth, or to live a foolish life. A great civilization means to turn the senses inward, to God, to control them and to become the ruler in this house of the Self.

Let us finish this article about the meaning of Jnana Yoga with these beautiful concluding thought of Swami Vivekananda:

“Think of the slavery in which we are [bound]. Every beautiful form I see, every sound of praise I hear, immediately attracts me; every word of blame I hear immediately repels me. Every fool has an influence over my mind. Every little movement in the world makes an impression upon me. Is this a life worth living?

So when you have realized the misery of this physical existence - when you have become convinced that such a life is not worth living - you have made the first step towards Jnana. ”

You can read the integral version of THE FIRST STEP TOWARDS JNANA by Swami Vivekananda here.

On of the ways to practice Jnana is by studying the Vedas. However, it is difficult to do that on your own. Often you would need a qualified teacher - a Guru. A guru will tell you that it is not enough to just read the sacred texts. You would have to approach them with clear, purified mind, not with the usual scientific or skeptical mind. Moreover, you would have to develop concentration and steadiness of the mind, so that you can keep your focus and allow this knowledge to be absorbed with your complete self. If you do that, and after long preparations you will be able to make progress in Jnana yoga. The stages of progress include clearing your doubts regarding the knowledge of Jnana. You do that by keeping an open mind and heart and by conducting useful discussions with your spiritual teacher. The ultimate goal of Jnana is not knowledge in itself, but self-realization via application of that knowledge in practice. It means changing yourself, your wrong habits, negative emotions, prejudices and wrong beliefs.

what about jnana yoga poses?

I don't think they are important in this type of yoga. Reading and understanding the important ancient sacred texts, like the Vedas, is much more important. Meditation and contemplation regardless of the posture are important too. Mantra meditation on the mantra "I am" is also one of the possible spiritual practices.