The crown energy center - Sahasrara - is located at the top of the head. It is the center of primeval life, one of absolute, limitless consciousness. If awaken to its full capacity, Sahasrara will surpass all the other centers, both in beauty and in quality. The crown center is capable of irradiating energy of unspeakably beautiful colors and with extremely high speed.

The crown center contains all of the spectral colors, but the vivid violet flame is its most dominant facet. In the eastern manuscripts this chakra is described as the 1000 petaled lotus, which is close to the exact number of 972 primal forces emanating from this center. 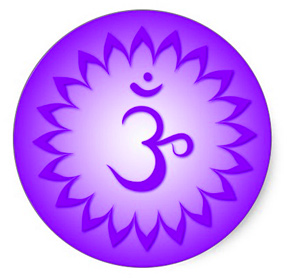 In the middle of this chakra there is a heart-shaped area where the energy of the physical Sun enters our microcosm. This energy flows into the crown chakra along with the Seven Divine rays of light, bringing in different qualities and spiritual traits into our being. The Divine rays of light circulate throughout our subtle bodies, awakening the thymus gland and opening the path to the Bridge of freedom.

We are usually more adapted to Earth's planetary energies - the ones that enter via the first energy center. Therefore, the Divine and Transcendental energies which have their origin in the spiritual planes remain basically unknown to us for a long period of time. Eventually, we become aware also of the energies that flow in through the seventh energy center. These are seen as seven differently colored streams and, in fact, our consciousness, over time, learns how to react to them.

The symbols of Sahasrara Chakra

The symbols of Sahasrara are:

What Does it Mean to Master the Crown Center?

The crown chakra is awakened last. While initially it has more or less the same spatial dimensions as the other six chakras, this energy center will increase in size as you make significant progress on the path of spiritual development. At first, the crown center is directed toward receiving the Divine streams coming from above. When you start to realize your spiritual goals and when you strengthen your Christ self to a sufficient degree, this chakra will change its orientation, and your energy will start to flow from inside out. Sahasrara will then rise above the head as the true crown of glory and the static and kinetic aspects of your consciousness will be finally united.

The static and kinetic aspects of the consciousness are finally united.

Other Facts About the Sahasrara Chakra

Although some sources state that this chakra can be blocked, the truth is the Crown Chakra is the only energy center of our body that hasn't been affected by negative energies.

Sahasrara embodies your highest purpose an an individual on the material plane. That is not to say that there are no higher chakras. In fact, many sacred spiritual texts speak of at least seven additional energy centers above Sahasrara.

Sahasrara is your portal to the higher dimensions of consciousness. It can be achieved through the process of enlightenment — becoming one with the totality of existence.

Wisdom, blissful energies, and Divine freedom flow into us from above, from this chakra.