Unlike the previous five, the sixth energy center – Ajna chakra – is not connected to the spinal cord. Ajna (also called by some Third Eye Chakra) is situated between the eyebrows and it has two main petals, or two primary fields of energy. One of them is of pink-red color with intense yellow hues, whereas the other is purple-blue. If we were to count the vibrational fields, we would see that each half consists of 48 distinct vibratory modes, making a total of 96 separate energies of Ajna.

This sudden jump from 16 to 96 fields (Vishuddha chakra has 16 fields), as well as the next step from 96 to 972 when going from the sixth to the seventh energy center, is an indication of the importance of the highest chakras. We are still unaware of all the factors determining the number of vibrational fields within a chakra. Still, it is clear that our complexity as human beings cannot be realized with a limited number of different forces at our disposal. 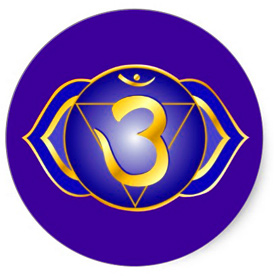 The sixth energy center is the seat of altruistic feelings, in particular it is a center of love, will and intelligence in their highest aspects. Here, you can develop understanding of the more subtle nuances of compassion, tenderness, patience, sacrifice, tolerance, meditativeness, gentleness, self-sacrifice, strength, generosity, dignity, etc. People with negative tendencies, in this chakra usually show only haughtiness and arogance.

Ajna controls some of the highest mental functions: memory, recollection, intuition, consciousness and unconsciousness. More than 50 percent of the capacity of this chakra is never used because we are not accustomed to using the skills of intuitive thinking.

For example, in healing and self-healing the unconscious part of our mind is of prime importance. The brow center is very closely connected with the heart center.

The symbols of Ajna Chakra

The symbols of Ajna are:

What Does it Mean to Master the Third Eye Center?

People who succeed in mastering this energy center never fall down to a lower level. They have their karma absolved and their evil deeds forgiven. They possess the knowledge of the first six energy centers combined – they see and they know.

Ajna represents our Unity with the Father. From Heaven to Earth the blue flame of light is manifested in the brow energy center.

All in all, this is a powerful energy center, one that brings a lot of abilities and responsibilities. If you are drawn to work with this chakra for the purpose of acquiring its powers, you should check this article. We never encourage opening the third eye chakra by deliberate action or by force. It will open one day in a natural way, after purifying your lower nature and working on the ego.

What are your experiences with Ajna chakra? Share them with us in the comments below:

Sunny,
I found your website very informative with a great guidance. I bought a chakra pendulum a couple of weeks ago to test my chakras which they claim to show open or closed. I got the positive results for all of my chakras except for the Ajnya chakra(6th). What is your advise on working on this chakra? As you have explained, I don't want to rush on this process and would like to evolve slowly but making good progress. Thanks for your help.

Hi Vina
Yes, you have understood our recommendations correctly. The rigth way to work on the chakras is the indirect way. Use the meditation techniques and/or prayers that are close to your heart, or those that are preferred in your spiritual development practice. The point is to purify your physical, etheric and other subtle bodies naturally and gradually, which will also reflect on the purity and balance of the main seven chakras. That is by far the best and safest way. Thanks for the comment, and God bless!

They have their karma absolved and their evil deeds forgiven?????
this quotation might give a wrong idea who practice meditation...coz you probably reach to that stage when you have purified yourself by austerity and sadhna...plus dont you know there are fake kundalini as well followed by the ego of mankind.....??
becarefull when you mention something like this or use the proper language..
it will be something like if a christian commit a crime and confess or a muslim commit a crime and pray..(it is not the way to get out of karmas...is it)

Hi Dave
Point taken, and thanks for the comment and warning. With love and light
sunny