Shungite is a form of carbon, pretty much like coal, jet, graphite, and, maybe surprisingly for some people, diamond.

Of course, the difference is in the arrangement of carbon atoms. Unlike Diamond, Shungite comes in the form of non-crystalline carbon. Graphite is not really crystalline as well, but it has a better defined long range structure. As for Shungite, it resembles nano-structure materials.

The same name, Shungite, is used to describe some carbon-based metamorphic rocks from Russia. Shungite's original location is close to the Onega lake in Northern Russia.

Although today we know that Shungite occurs in other regions of the world, the largest deposits of this mineral are in the Zazhoginsky mine in Russia. 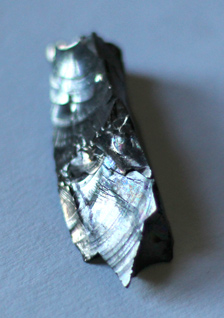 Shungite is believed to be an ancient stone, as old as two billion years. It has become increasingly popular in the crystal metaphysical community due to its great energy and various beneficial effects.

There are two theories about the origin of Shungite. One of them states that it has been formed in the ocean from tiny microscopic long ago extinct sea creatures. After they died out, they have become part of the sea bed and then a part of land masses and Shungite rocks.

The second theory is that this stone is of extraterrestrial origin (meteorite).

Either way, one thing is certain, this is a powerful stone with great benefits.

The Use of Shungite

The therapeutic properties of Shungite have been known ever since the 18th century. The Russian emperor, Peter the Great, built one the first water purification facility (spa) using the cleansing properties of this stone.

Today it is scientifically confirmed that Shungite indeed has antibacterial action. It can remove heavy metals, VOCs, pesticides, chlorine, germs, and other pollutants.

Still be extremely cautious if you want to use your Shungite specimens to purify water. By all means consult an expert to verify that indeed your stones do their supposed function. There are various grades of Shungite which are not equally efficient. In addition, they may clog. This is not an area to experiment as it may negatively impact your health.

Other uses of carbon based stone include painting (as a pigment for black color), insulation, and as a low density filler due to its very low specific density.

There are Shungite stones of various quality. Cheaper pieces are usually an indication that the stone is not genuine.

Genuine Shungite is black in color. If the stone is polished, usually there are white or gold colored bands on its surface. Moreover, Shungite conducts electric current, so you can use this properties to test against similarly looking stones.

The Uniqueness of Shungite

What sets this stone apart from all the other crystals and minerals is the presence of fullerenes embedded within the stone itself.

There are two types of Shungite, higher grade and lower grade. The lower grade is the dull coal-like black shungite. The more rare higher grade is the shiny galena-like silver shungite. The main difference is in the carbon (and fullerene) content. Black shungite contains up to 50 percent carbon, whereas silver shungite contains at least 80 percent. The higher grade Shungite is very brittle. It can be a hard task to cut or carve it, so most likely you will get it in an irregular shape.

Shungite is a rejuvenating stone. It is believed to work at the cellular level to energize and cleanse the physical, astral, and mental body.

As any black stone, Shungite is believed to have grounding and protective properties. You can use it to ground your energy and establish a contact with the earth energy.

Moreover, it can protect the wearer from harmful EM radiation, including the one originating from cell phones, wi-fi routers, computers, and other electrical appliances.

The fullerenes in Shungite are thought to be able to neutralize a great many forms of negative energy.

Shungite has been used in crystal therapy of depression and traumas.

In healing of the physical body Shungite is believed to be of help in case of allergies, skin diseases, and insects bites.

Unlike other stones, Shungite should only be cleansed in clean filtered water or natural running water (not fluoridated tap water). You should charge it in sunlight for several hours.

This is one of the gifts of Mother Earth to help us cleanse our environment.

Use it with care if you want to purify drinking water though. Even better, don't use it that way at all. The reason is that Shungite contains nano-particles and the actual health impact of nano-materials is not known yet. There are some indications that larger fullerene structures or carbon nano-tubes can be harmful. On the other hand, there are sources that claim that while fullerenes in water can be harmful, fullerenes in oil are perfectly safe, and can be beneficial.

But you can always use it externally to harness its powerful metaphysical properties. Shungite can be a potent healing and cleansing tool in meditation, crystal healing sessions, or any kind of metaphysical work.

I love your detailed description of Shungite. Can you please tell me if the lower grade Shungite can be polished as you have said the higher grade is brittle and it is hard to cut and carve. I have seen some carved free forms claiming to be "Elite" Shungite and wondered if that was the higher quality. Blessings and thank you.

Hi Gaye and thanks for the question. I too have seen high quality Shungite in their carved form. I guess, it is hard but not impossible, so I wouldn't take this as the main criterion for distinguishing between the two forms. Many blessings to you too.

Hello, I just discovered shungite crystal and it's healing properties. I chose and purchased the elite shungite as this was recommended and wildly used for water charging and purification and it has a stronger vibration and qualities than the regular one. You mentioned couple of times above that we should not use raw crystal pieces for this purpose. Elite shungite only comes in that form and now I'm concerned. Some information even mention that they can develop some rust, but it is still safe to use. Is it truly safe to use?

I also been working/meditating with green calcite lately and thought it would be nice to have the benefit of it on a cellular level as well. Can it be used to charge water? Many thanks.

Hi Szilvia
I would be very careful with calcite, as water can affect it. Better not to immerse in water. The same more or less holds for shungite as well. Put it on the outside of the water container, and the watter will absorb the vibration without the potentially harmful effects.

Now just tell me how that the "watter" can absorb the vibration". I have trouble with that!

Haven't you ever heard of vibrational modes of a water molecule?

I have trouble visually (or generally) distinguishing jet and shungite. I know the different chemical and geological properties, but I cannot tell one from another. Could you clarify that for me?

I know what you mean and you are right. Both are similar in term of chemical and geological properties. It takes getting used to their subtle differences. Shungite has a distinctive surface, so you may use their surface features as a way to discriminate them. I suggest to visit a well equipped crystal shop and play around with them.

Hi, I just purchased a shungite bracelet for its properties. Does it leave, stain charcoal color? First time I buy crystals that do that. Thank you

It may have that color, but it certainly doesn't leave it. Unless, probably, not sure about it, it's not polished properly.