The main keywords of the Ten of Wands card are Trouble and Anxiety. This card from the Minor Arcana Deck also means persistence, reliability, strength, and will. As far as the position of this Tarot Card on the Kabbalistic Tree of life is concerned, it belongs to the Malkut Sephirot. Astrological characteristics: Saturn in Sagittarius. Here we are faced with the greatest aversion; Sagittarius is spiritual, swift, illusive, light, and bright. Saturn is material, slow, heavy, dark and stubborn. This combination can be understood as an imaginative ambition coupled with a direct etheric manifestation. The awkwardness of Saturn is being changed in Sagittarius — there is a visible stimulus, we see the principles of self consciousness at work, and there is added inspiration.

This card (in the most famous Rider Waite Deck) depict a male figure crushed under the burden of the ten wands in his hands. The staves are arranged so closely before him that the man is unable to see where he is going. All around this card there is a strange atmosphere suggesting that someone or something may suffer from the stave, once the person carrying them came to the intended location. The male figure carries a great burden, but obviously he is more than capable to cope with it.

This card represents a strong personality, exemplified by people of the third decan of Sagittarius.

The middle path: The best balance for persons of this type is achieved if they cultivate compassion and pity. The true strength is always gentle and forgiving. They need to amend their strictness with nobility and tolerance. 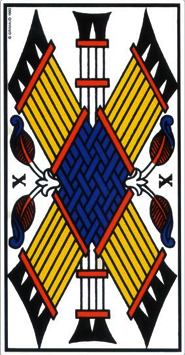 The potential of the 10 of Wands Tarot, as expressed in the number 10 is persistence. Saturn, on top of that, brings intensity. Fire, as the main element of this card, means dynamic energy.

Here, we move from the individual accomplishments of Nine of Wands to the next logical step: contributing to the wellbeing of the community.

We can derive additional meaning from the symbolism of number 10. This number symbolizes the totality of all things. It is also a symbol of the returning path to Unity (1 plus 0 = 1). Number 10 also signifies the original state of non duality whose symbol is Ayin (Nothing, Zero). Read more about the Kabbalistic Ayin here. This Tarot card is not given the name Trouble by chance. We get in trouble when we exert force, and only force, all the time. The sluggish and heavy Saturn squashes and suppresses the etheric fiery side of Sagittarius. It’s a force separated from its spiritual origin, blinded fire in its most destructive form. Yes, there is a willing in manifestation, but this will is not able to understand anything apart from its blunt purpose, eventually leading to its own annihilation in the self provoked fire.

The divinatory meaning of this tarot card could be summarized as follows: Cruel and arrogant powers and energies applied only to achieving selfish and material goals. Sometimes it means failure and too strong a resistance provoked by the stubbornness of the person whom the reading is being performed to. It may signify resentment, superficial conclusions, lying, malice, slander, hostility, and speed in wrong doing. Exuberance may suffer from the burden of duty. Otherwise, it may hint toward generosity, self-sacrifice, business deals, something big and consolidated. It all depends on the position of the Ten of Wands Tarot Card.

This card may also be an indication that you are entering a difficult phase of some project. It often happens when we are close to the end, we lack energy and/or enthusiasm. This may happen in the final phases of your project, when you have to make the necessary extra effort to bring things to fruition. Despite all the tiredness, you have to go on.

Traditionally, the reversed meanings of 10 of Wands hint toward difficulties, intrigues and work without results. Other interpretations suggest that the weight has been lifted and that the difficulties are over. Or maybe there is a denial and refusing to take responsibility of the situation.

I asked about his loyal my lover is ti me and I drew the 10 of wands with the empress. Would u say the empress brings out all the positive characteristics of 10 of wands. So he would be responsible and faithful?