The keywords of the Hierophant Tarot Card are: respect, knowledge, holiness, and wisdom. This card is also known as the Magus of the Eternal Gods or the Pope.

The Hierophant is the archetype of spirituality and is often known as the holy man. Of all the  Tarot cards,  this one does focus on the spiritual and religious aspects of existence. In a broader sense, Hierophant is anyone who has secrets or hidden knowledge, even though this card is called “the Pope” in some of the decks. It can be a priest, a guru, or a rabbi.

The Hierophant is a member of the Major Arcana Subset of Tarot. On the Kabbalistic Tree of life, it represent the 16th Path (Hebrew letter Vav) between the Sephiroth Chokmah (Wisdom) and Chesed (the glorious sphere of Grace). It corresponds to the Earth element, planet Venus, and the Zodiac sign of Taurus. 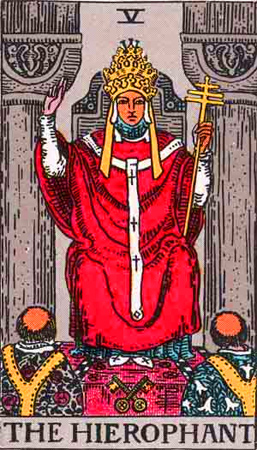 In this representation, the Hierophant is seated on a throne between two columns. He wears a triple crown and holds a scepter in his left hand, while at the same time making a ritual gesture with his left hand. Two ministers kneel before him at his feet. He represents the power of external religion, as opposed to the High Priestess, who is the representative of the inner, esoteric power.

The Hierophant is the channel of Divine energies for the manifested world. He is the head of the recognized religious hierarchy, which is just a mere reflection of a greater Divine Hierarchy for our planet Earth.

In context of the Fool’s journey through life, every card (from 0 to 21) can be considered a part of Fool’s story of self-discovery. The Fool encounters the Hierophant when he is struck with existential fear.

The Fool has decided what to do and how to proceed with his future, but in spite of the resolution, he is faced with fear and panic. He fears that everything he has will be lost, vanished, and destroyed. He fears that the things he has done may not be enough and he may suffer in the future.

So the Fool goes to a holy ground and locates the Hierophant. The Fool kneels down in front of the Hierophant, reveals his fears and asks for some advices and teachings.

The Hierophant offers the Fool 2 solutions. The first solution is to give up the thing that he has and he is afraid to lose, so the fear wouldn’t have control over the Fool’s life anymore.

The second solution is to receive whatever comes his way with an open heart. Even if the Fool lost everything that he had built, the knowledge and experiences he has gained are precious and these will not be lost. They will be with him v. After the advice from the Hierophant, the Fool is relieved and continues to face his life’s journey with confidence again. 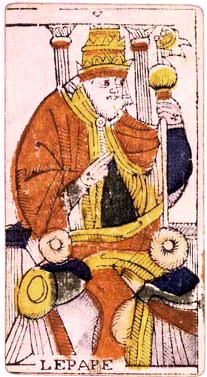 Unlike the High Priestess, who deals with the Heavenly realms, the Hierophant deals with the problems of the world in a spiritual way. His job is to create peace and harmony on Earth. He comes after the Emperor Tarot Card.

The Hierophant often represents groups instead of just individual people, and he’s better at dealing with larger communities rather than with single persons. He believes that a group or institution can do bigger and more useful job, rather than doing it individually. It makes sense: a number of people who can do good outweigh a single person who can do the same thing.

The Hierophant is also mentor or teacher on a personal level. He is a spiritual leader who teaches others the ways of his beliefs and would want them to join him. He is the suitable candidate to teach others because he holds the secrets and conventional beliefs.

A problem that one may encounter when dealing with the Hierophant is that he may be biased and stubborn. Although he is very smart, he is also very traditional, which many people may not like. So, depending on the other symbols, this Tarot card might not be a positive sign in Tarot readings because of Hierophant’s dullness, stubbornness and unreasonable conduct at times.

The Hierophant in Tarot Readings

If the Hierophant in a Tarot cards reading should represent a person, this person is most likely a counselor, teacher, advisor etc. The person may be old, down to earth, and may always offer some sort of dull advice.

The meaning of this card, for example, may also represent an unpleasant teacher who the Querent will deal with in the future. It could be the teacher who always insists on following the text book, someone who is inflexible or long-faced, or someone who always want to keep things in a traditional and old-fashioned way.

If the Hierophant stands for the Querent, it could mean a warning that you are being too straightforward, stubborn, or dull in some respect, for example, in terms of ethics or social matters. Therefore, it could be a reminder to the Querent to be a better and more caring advisor.

When things aren’t going smoothly or as planned, the Hierophant comes in and gives some practical and useful advice. More importantly, he carries the power and means to calm the Querent down.

In its reversed meaning, the Hierophant could mean breaking the conventional norms and established morals. It could also mean inflexible behavior and excessive stubbornness.

The Spiritual Meaning of the Hierophant Card

If you currently require more experience which you may not possess, then have an open heart and seek for a mentor or teacher. However, don’t openly and actively seek for the mentor because the mentor will automatically appear when you are ready for it.

This Tarot card does not give an answer with a mystery. It tells you that the solution exists and though it’s not going to be quick and easy, it’s achievable and you just have to do it.

When an idea does not work out, perhaps it’s time to change to a new one even you do things using the traditional methods.

Simply put, the Hierophant has great personal qualities if you know where to look. He says that he stands firm in his beliefs but will be flexible in changing situations and doesn’t follow them blindly.