Out of the 22 Major Arcana, the Chariot is number 7. This card comes after the Lovers Tarot card and precedes the Strength Tarot card. Important keywords for the Chariot card are motion, balance, skill, control, and determination. This card is also known as Lord of the Triumph of Light. It symbolizes the water element, which means dealing with emotions.

One of the metaphysical meanings of Chariot card is "domination of spirit over form". It represents the very notion of "concentration attained by dedication". To this card we assign the Moon as a celestial body. The horoscope sign Cancer.

The Chariot indicates being able to make use of your emotions to control what you want deep down in your heart. You can also use your emotions as a means for achieving your life goals. 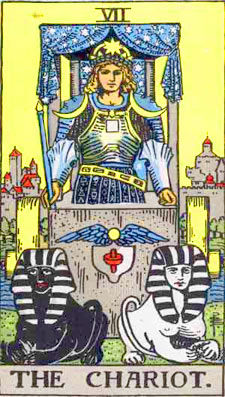 On the Tree of Life, each Major Arcana card is linked to a certain path that connects two nearby Sephirot. This card connect Binah and Geburah, and corresponds to path number 18. It is worth noticing that the Angelic hierarchy of the Binah sephirot are the Thrones. In that sense, the Chariot can be considered a mobile Throne of God. If you look closely, you will notice that the Charioteer carries the Urim and Thummim, associated with the Hebrew High Priest's breastplate.

Following the journey of the Fool through the Tarot cards, the Fool has gone a long way on its journey. Now he is closer to what he wants to achieve. However, there are enemies that are stopping him and he struggles to stay on the path. He is confused, losing momentum and struggling. He ponders hard on how to win against the enemies and carry on with his journey.

At this point, the Fool comes across the Chariot. Besides praising the charioteer as a triumphant warrior, the Fool asks for some advice on the methods to defeat his enemies.

The charioteer says that the Fool needs to armor himself and to focus on his goal. He needs to be clear where he wants to go and what he means to do. And then, he needs to control the direction of his chariot, keeping the wheels always turning in the right direction. He also needs to have great confidence in his cause, never lose his motivation. If enemies appear, he has to run them down, no matter how formidable they are.

After listening to the charioteer, the Fool gets the inspiration on how to continue his journey. Before he sets off to do that, the charioteer gives him yet another final advice.

He tells the Fool that the victory is always the beginning, not the end of the battle. One should know that before entering any contest. 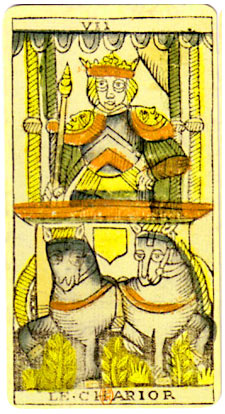 2 sphinxes, or 2 horses in some decks, of different colors (usually one white and the other black) pull the Chariot. The sphinx is a symbol of the mystery of Nature. Without control, the horses will run wild, just like our emotions. On the other hand, without the horses, the Chariot wouldn't be able to move. The same is true in our everyday life. We can't work well if we don't have emotions, if we don't control our passions. We need to take control and balance our inner world to be able to achieve success.

The meaning of the Chariot card is not so easy to understand. If you draw this card, it can mean struggle, war, and ultimate victory over your inner problems, over your outer enemies, or over various obstacles. Important thing to notice is that there are two horses. They are with different tendencies (black, white), but they must run in the same direction to achieve victory, so you have to have control.

The bottom line is: if you don't have control over your needs, wants, and emotions, you can't commit to your goals.

At the same time, motivation and confidence are required as well, that is, if you want to get things moving in the right direction. This Tarot card can also represent new ideas and inspiration to get you to action, for example, in case you encounter arduous and challenging situations.

The Charioteer depicted on this card looks like he can always control his emotions very well. That's why he will be able to take advantage of the various situations on his path rather easily. Like the charioteer, to achieve our goals faster, we need to learn how to control our emotional world.

When the Chariot appears from the Tarot deck, it often tells you to put efforts in controlling your emotions rather than wasting time and energy. There's no point complaining and grieving over the things you cannot change.

Fear is something very negative. Fear is one of the most destructive emotions that needs to be mastered. It can only weaken you, unless you are able to face it and turn it into something constructive. If you reach the stage of control over your emotional world, you can do almost anything!

Once you overcome your fear, you can bypass the restrictions of your own lower self, and that's when success comes knocking on your door.

Another important point with this card is that, in battle, the Charioteer can only win if the attack is coming from the side, and not head to head (obviously). So, it could be a message not to approach your problem directly, but to seek out alternative solutions. This card symbolizes faith and loyalty, faith in your will and passions. It will lead you to victory no matter what the odds are.

If the Chariot stands for the querent, the querent should always remember to save their energy for more things to come. Victory is just the beginning.

The spiritual message of this card cold be formulated like this: "Don't be distracted by anything that tries to pull you away from your goals. Believe in God first, then in your ability, and wisdom will come to your aid to fight the battles ahead."

In its reversed position, the Chariot tarot card implies lack of emotions, defeat, loss. It can also mean losing control over your desire, passions, or emotions in general. It can mean losing direction or purpose in life. The reverse Chariot could also indicate that the Querent knows what their goals are, but have lost determination and faith in them.