The Meaning of Eight of Wands Tarot Card

Main characteristic of 8 of Wands Tarot Card is speed. This is a card from the Minor Arcana set.

People born from 23rd of November to 2nd of December (first decade of Sagittarius) can learn a lot by examining the 8 of Wands card. Their main character virtues and flaws can be deducted directly for this tarot card.

The potential of this card is number 8, meaning sharpness and cleverness. Its frequency is that of Mercury – a planet that promotes sharp intellect (again).

The description of this card is rather simple: there are 8 wands moving in a group through the air. We get the impression that they move rather swiftly. 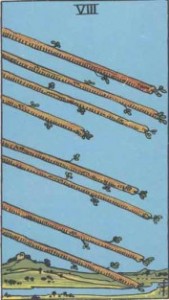 The wands we see in this card are speeding through the sky, which is clear and very bright. They cross water between bodies of land, which suggests distant travel, but the goal seems to be close, as the land is rapidly approaching. The skies are bright and clear, so the prospects have to be good.

The Wands represent the fiery energy which is very active, fast, and mobilized. They travel together, and seem to move without crossing each other. Whatever goals and aspirations had been planned, the chances are great for their manifestation.

Psychological aspects of Eight of Wands

People whose Tarot card 8 of Wands is are reasoning persons; they are critical, able to swiftly react to any situation, and they are known to have objective judgement about any situation or subject.

In this card we can witness a strong duality. It has its roots in in the unique combination of potential and frequency: we have the enhanced capability of logical prediction on one hand, which is being contradicted by impatience and haste on the other side. If we think about this for a moment, we’ll see that it follows naturally – a person who is able to swiftly grasp to the essence of any situation is often restless as he or she has to wait for the other to do the same.

On the positive side people of this card are insightful, practical and clever. They have a good coordination between the body and the spirit, enabling them to use their hands and their brain equally well. They are observers and analysts. They have initiative and determination. They take life instantly, without compromises. They are better interpreters than they are creators. Gifted in expressing their thoughts through oral communication and writing, they are reliable and refined.

On the negative side of things, the first decade Sagittarius persons are overly direct, impulsive and short-sighted. They are excessively critical, fierce in their decisions, and harsh in their deeds. Strangely enough, they seem to forget about the strength of the analytical calmness. They can be cold, selfish, and intolerant.

They approach life with logic, but their reactions are swift – this means that they can be harsh and cruel with others. They want to speed up the clock. Their double dosage of discerning and instinctive mind is the cause of their double dosage of unrest and impatience. They have problems calming down their tense nerves. They are difficult personalities as they always demand logical and intelligent conduct from the other people as well. Their demands can sometimes border with the impossible.

This tarot card has thus the following dichotomies:

The key to balance in the 8 of Wands Tarot Card is harmonious attitude toward life with a lot of tolerance and patience.

The Eight of Wands is a card where we see a burst of energy indicated through the synchronized movement of the wands. The staves are slightly inclined toward the ground indicating an imminent conclusion and resolution. 8 of Wands can mean powerful forward motion. This kind of power requires caution and precision, as it may not be always clear as to what the landing ground is. There are interpretations suggesting that this card means “falling in love”. The wands (broomsticks?) in Eight of Wands strongly associate astral projection and astral travel.

The reversed meanings could be: “falling out of love”, miscommunication, dispute, delay, slowing down, jealousy, regret and remorse. More about the reversed meaning of NUMBER 8 (all four elements) of tarot here.