The Meaning of Justice: Positive and Negative Aspects of Justice Tarot Card

The 11th tarot card is called Justice. If you think about justice in human terms, then you are far away from the true meaning of this card. The justice depicted in this member of the Major Arcana subset has nothing to do with our concept of justice, namely, individual courts, judges, attorneys... Our universe has a different, precise and unrestricted view on what justice is. There are higher forces at work here. The power of these forces is so great that it prescribes every single aspect of our daily needs, and it does so in terms of what we have merited and deserved, and not in terms of what we wish or what our point of view is about what is just or what isn’t just.

Karma: The Law of Action and Reaction

To each one individual incarnated soul on our planet, there is a set of laws which we name karma. This law simply means that everyone at the end reaps what he or she sows, even though it might not look that way at the beginning. In order to sow beneficial things, we need to treat other people with respect and dignity and our actions need to be honest and good. In line with the metaphysical system of karma, life is all of the time impartial and fair, and every action finds its appropriate reaction. That is why we say that justice is represented by the fundamental law of cause and effect. The yields of the choices made in the past need not come immediately, not even in many years, but be assured that sooner or later they will be here, manifested and expressed in their totality. 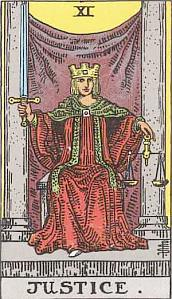 The Rider Waite image attached to this tarot card depicts a majestically looking human seated in the middle of two columns. This setup is very close to other card, namely the High Priestess. In the case of the High Priestess, the principles of Divine cognition, strength, and Divine law are much more prominent. The figure in the Justice tarot card holds two objects: a scale in one hand as a symbol of balance and a sword in the other to exemplify the preservation of that equilibrium even by means of force. Behind this figure there is a curtain through which we are unable to see. Those are the mystical and to us incomprehensible workings of the universe, ensuring that the inevitable outcome of our deeds and choices will always be there. There is no way of escaping the just sweets or bitter pills of our actions.

The Meaning of Justice in Tarot Readings

When this card appears in a given spread, it as almost as a rule a sign that our past actions will bring definite fruits in the future, future that is not so distant in this case. It is up to the seeker to recognize whether good or bad things are to be expected.

Another way of looking at this card is to concentrate on the balancing aspect and to direct our attention towards the accommodations needed in order to achieve that balance. Whether we speak about modification in diet, daily functioning or improvement of one’s overall health, it is again up to the querent to decipher. As with all the other Tarot Cards, the other bordering cards and their locations will help in adding some important details to the meanings of Justice card.

There is a another aspect of this card. Justice can mean factual court case or transactions, or probably contracts, and arrangements of some kind. If Justice appears it can refer even to medical affairs and the seeker can be at the start of a long, difficult combat. If there is a demand to sign some papers of legal nature, do not forget to examine the small print so that you will eventually break through as the winner in the situation. Have in mind though that this card will never assure us with what we desire or need, it just assures that the outcome of our affairs will be just.

The other meanings of Justice Tarot card can include: analysis, conclusion, space, impartiality, reason, system of logic, and obligation.

Also there can be some other meanings of this card, such as relations and communications with other people, on professional or personal level, or sometimes even love relationships can be included too. This card in some reading also signals toward decisions that need to be made.

This tarot card may describe a relationship where everything is clear and easy to follow, a blessed love. Everyone knows where they stand, what to expect, how to behave. Justice for all people involved is what comes out from a love relationship that is fair and morally right.

The opposite is equally true. Unbalanced love brings all sorts of trouble, and there's certainly no justice for the part that is submissive or less dominant. This is justice reversed (see below).

If you are not in a relationship this car can indicate a period of waiting. And after the waiting period, there's often a turn, like an unexpected someone from the past, or someone you never saw like a possible lover.

If this card reverses, it is a sign of not favorable court ruling, band judgements, or negative outcomes. The querer is faced with situations that go against them. Sometimes, even if things have been going on as planned, the querer is not happy with the end result.

So, if Justice reverses, it is never a good sign. However, be aware that all hardships are temporary, and that the situation will improve. Even though the querer may feel injustice, they should refrain from blaming others and take responsibility for the situation in which they have put themselves in.

Justice and the Tower Together

The Tower card symbolizes inevitable changes that are to happen. The Justice card means restoring balance and harmony. The two together would then mean some kind of predetermined intervention that changes everything for the better and restores balance and justice. It could be that the querer was headed in a wrong direction before, but now the situation is improved.

Justice and the High Priestess

Both cards are symbolizing some kind of equilibrium. As already indicated they even look the same. The High Priestess represents the moon, including its qualities of intuition, creativity, and secret knowledge. The moon has also has two extremes, two sides, dark and light. Justice, on the other hand, represents the balance of the middle path, of what is right and fair. Justice knows no extremes, It doesn't go into extremes.

If they appear together they may indicate changes that are about to happen. The High Priestess can be considered as a teacher that provides intuition for advancement but also has a hidden part. The Justice is more like what's happening here and now, the basis of our existence, the necessary support for making the next step.

Strength represents both the inner and the outer battle. Justice represents honesty and objectivity, true balance and harmony, regardless of your feelings and opinions. Their combination could mean finding inner strenth and standing up for what's true and honest. Maybe also being prepared to fight for it.

At the end, let us summarize how important the Justice Tarot Card. Its importance is seen in showing you the things that are about to be resolved either in your favor or against it, depending on your former deeds. Justice is always just; it doesn't matter if you do can't see it as such. There will be light at the end of your tunnel, or there will be a period of time when you need to endure further hardships, before coming to the end of some stressful period of your life.

I've just drawn justice tarot card as love outcome in a negative way. What's the meaning of that, and will things be fair in love?

There are many possibilities. This card looks like a break up card, but there is a strong tendency toward working things out and balancing the differences. It could be that your partner has some legal issues ahead. It could mean that fair treatment in you love relationship is needed, meaning to treat your lover the way you would like to be treated. It could also mean than either side in the relationship won't be quite pleased presently, but this won't matter in the future. Even if the outcome is not to your liking, you will find peace in it because the right things are going to happen.

Hi, I pulled the Justice card in response to, "Did he have a life changing experience recently?"

I would say so. The other cards in the spread are mostly major and indicate a change of heart.