The Relation Between Tarot and Symbols

Before considering the relations between Tarot and Symbols, let us first see how we can define a symbol. A symbol, as defined by Carl Gustav Jung, is a representation of something unfamiliar to the psyche, usually an instance of the Self (which is also the central archetype). Jung's symbol is something that is not so easy to grasp. Its meaning is not fully known. It could be an expression of an intuitive idea whose formulation is not easily made. A symbols is a symbol precisely because there is an inherent ambiguity within it. There is no single sided formulation — there is a multitude of meanings.  (More on Jung and symbolism you can find here.)

One of the most important functions of a symbol is to transform life energy from some lower form to a higher form.

What Are Symbols Needed For in the First Place? 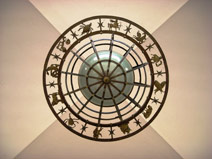 Our conscious psyche, our conscious Self, or our ego is capable of using only conceptual language. In other words, it uses terms like white or black, good or bad, positive or negative. It always chooses one out of two possibilities. This is what’s usually called analytic mind or analytic logic. Unfortunately, messages broadcasted this way have difficulties finding their way to the subconscious mind. The language that is being spoken by the subconscious mind is the language of the symbols. The subconscious processes are symbolic processes, that is, either pictorial or experiences related to those pictures. Think dreams, or think dream logic, and you will know what’s being referred to with the term “symbolic processes”.

Symbols can be understood as a new kind of technical tool that enable us to get in touch with our subconscious.

Are All Pictures That We See in Our Surroundings Symbols?

Here comes the problem of distinguishing between symbols, allegories (metaphors) and signs. A sign is a conventionally accepted shortcut, a widely accepted indicator of something known. An allegory is a sort of limited symbol that has only one meaning, and thus, it only paraphrases the conscious content. But, a symbol is something quite different. While all the elements of the symbol may be known, there is still something hidden in it, a secret that cannot be fully grasped.

Let us illustrate this on one of the Tarot Cards, for example on the High Priestess Major Arcana. We see there a lot of familiar elements, such as female figure, plants, horns, a cross, pillars, etc. But, despite all this familiarity, the High Priestess Card as a whole conveys a special message about a state of consciousness elusive to the ordinary ego consciousness.

So, Given the Above, Where Does Tarot Fit in?

And, also, what benefits do we get from working with this mystical tool? And what does the Major Arcana set of cards mean?

If we realize how important symbols are in our life, the main benefit would come from tarot’s great potential in integration of the personality. That means creating a united and whole personality by embracing all the hidden things or obstacles that prevent our self-growth and personal development. In that sense, Tarot could be yet another powerful path of self realization, a path of discovering our true being, our true Self.

In contrast to some other psychological methods where the interpretation of the inner state of being comes from outside (often from another person), with Tarot symbols, the querent is at the same time the one who projects his/her subconscious into the symbols and tries to decipher the meaning of those symbols.

At the later stages of mastery, those projections are merged into one whole, creating a personality capable of reaching one’s own intuition via the Tarot symbols, and bringing the great wisdom of the inner world into the light of day.

Yet another important distinction is the difference between archetypes and archetypal images. Let’s start from the Tarot again.

What are the Tarot Arcanas actually?

They are archetypal images of the transformation and transfigurations of the human race as a whole. In other word, they represent the typical situations which the humanity has passed through, preserved on the level of the collective unconscious.

More precisely, the collective experience of the human race has been registered in the archetype matrix, only to produce the various Tarot Cards at a latter stage. All this despite the possible differences in terms of time, place, nation and race.

It is important to emphasize that certain Eastern traditions, such as Yoga or Zen Buddhism, approach the unconscious psyche directly. This approach can be sudden and brutal at times. The Western esoteric tradition does not go directly. Instead, it uses a more indirect approach, utilizing the symbols, among which the symbols of the Tarot cards are very prominent.

In the latter approach, by using concentration, visualization and projection, the symbols can be a means of transformation and tools to put in motion the psychic energy of the subconscious. This in turn, helps the development of intuition, imagination and creative potential of the mind. This is what sets apart the true spiritual seekers from the mere collectors of symbols and numismatics suppliers.

But even if you just read the cards, you should pay attention to symbols. It may happen that a specific symbol catches your attention more often than the others. Do not think that this is just a coincidence!

It is your subconscious mind trying to tell you something... maybe it is an intuitive realization, or maybe an important message that can change things for you or for the querer. Consider the meaning of that symbol and you will be able to bring more clarity into your reading.

What do you think about the mutual connection between the Tarot and symbols? How do you treat the symbols that appear in the Tarot cards, as opposed to the symbol represented by the Tarot card itself? You can share your thought in the comment section below.