Card number 10 is Wheel of Fortune. It belongs to the Major Arcana subset of Tarot. When assigned a path on the Kabbalistic Tree of Life, it sits on the connecting line between Sephirot Chesed and Netzach. Knowing that Chesed means kindness, while Netzatch eternity could help us in our intuitive understanding of the features embedded in this card.  Those features are exactly the one needed to relate the two types of consciousness indicated and symbolized by Chesed and Netzach.

Some of the keywords of this card are Secret, Will, Authority and Desire.

The associated planet is Jupiter, indicating expansion and intuition. The fortune bestowed by Jupiter cannot exactly be described as good luck. It is rather the kind of luck related to the unexpected, uncalculated factors. 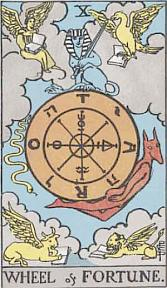 While people often talk of fate or coincidence, the deeper, more spiritual levels of understanding suggest that the law of karma is responsible and more appropriate for describing those aspects of human life designated as fate, luck and fortune. It is not so easy to see, even for the enlightened masters, this broad, all-encompassing picture that opens up in front of our eyes when looking at this Tarot Card.

There are several important magical and alchemical symbols depicted here.

These four figures are sometimes referred to as the four Cherubim, Cherub, or Cherubs. They stand for the four basic virtues: to know, to will, to dare, and to be silent. They also signify fire, water, air and earth. They can also be thought of as being linked to the horoscope signs of Leo, Taurus, Aquarius, and Scorpio.

The Sphinx symbolizes the intentional sacrifice of sexual energy to the higher powers of our human universe in order to be able to get in touch with the spheres of intelligence above our present levels of consciousness.

The tree figures situated directly on the Wheel are also believed to represent the tree alchemical elements: salt (represented by the Typhoon), mercury (Anubis) and sulfur (Sphinx). These elements mark the shape, phase and potential of energy. Salt, or tamas in the Eastern philosophy means darkness, ignorance, and death. Sulfur, or rajas in the East, represents energy, thrill, fire, glow and unrest. Mercury, or sattva in the Eastern teachings, means calm, intelligence, know how, lucidity, and balance. It marks the essence of a being or an object.

In this sense, the Wheel of Fortune Tarot Card tells us that there are difficulties that need to be overcome (salt, tamas, Typhoon) by means of strength and energy (mercury, rajas or Anubis) in order to get to the essence (the Sphinx). From there, one can go even higher to the more spiritual worlds.

In the metaphysical sense, the Wheel is the most central point of life. It could be understood also as that point when the summit has been achieved, and the descend is imminent. The spokes on the wheel represent the directions that lead to our inner Self.

When used in readings, the Major Arcana nr. 10 can indicate a change of fortune, usually for the better, or unexpected success, prosperity and advancement.

When used in love and relationship readings it can indicate several things.

The Wheel of Fortune reversed could still be a good omen, but in this case the volatility of the situation can be more pronounced. Some readers would like to say that in the reversed meanings this card brings failure and bad luck. It is more likely, though, that it will only hint toward the need for more strength and belief in order to push through the situation.

sunnyray says:
04-22-2015
Hi roxie,
The card as it appears above was invented by the famous mystic A.E. Waite. In his own words, the letters on the wheel (TARO, that is Tarot) should be looked at as "Rota Taro Orat Tora Ator" which loosely translates into "The wheel of Tarot speaks the law of Love".

Donna whitfiekd says:
05-08-2017
Hi can u help me I'm trying to find out what 6 of the major arcana have the four creatures of ezekial in them can u help plez