The world's largest pure gemstone quality jade named "Polar Pride" was discovered in British Columbia in the vicinity of Dease Lake. It weighed 18 tones, and see the photo of this rough stone below. Note that this is the largest jade every found of gemstone quality. This stone was afterward carved in Thailand and turned into a beautiful Jade Buddha for promotion of Universal Peace.

There are other, even larger Buddha statues carved from jade, but this is the largest made out of gemstone quality jade. The Jade Buddha is put on an 1.4 meters high alabaster throne. The statue has been touring the major cities around the world for several years now. After the tour is over it will be placed at The Great Stupa of Universal Compassion in Bendigo, Australia. 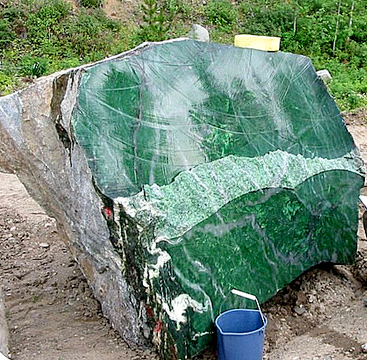 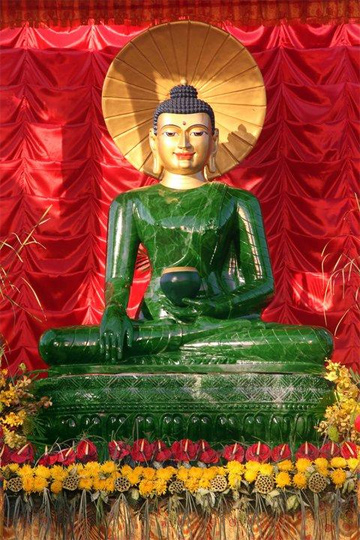 The absolute largest jade in the world is found in Myanmar, a country in Asia formerly known as Burma. I could not find a photo of this jade, but the information seems to be credible. This area of the world is rich in various types of semi precious stones, as well as precious gemstones. Myanmar is also abundant in rubies, sapphires, diamonds, garnets, spinels, tourmalines, moonstones, pearls, and many other stones, which makes it sort o paradise for all collectors of minerals and crystals.

Jade is a stone that has reached almost a cult status amongst the Chinese people in the past. Very much revered also by the Japanese and Koreans, this royal gemstone in Myanmar is of special constituency, and excellent quality. Apart from the white and green shades, it can be found in a lot of shades, including red, yellow, purple, orange, even blue color. The emerald green tones are also to be found, in which case this type is called imperial jade.

Jade usually comes in two slightly different varieties, jadeite and nephrite. Jadeite is especially rare throughout the world, but in Myanmar there can be found exemplary specimens of jadeite. The products from Myanmar's mines are therefore exported as gems, sculptures and jewelry.

The largest Jade in the world was discovered in 2001. It is a gigantic monolith stone, about seventy feet long and 20 feet in diameter, weighting around 2000 tons. Covered with black serpentine, this jade shows beautiful crystals of violet, green and white color. This monumental stone was given the name “Jade Dragon of Pha Kanto Region”. Formerly, the largest jade found in the same region weighted 33 tons.

Do you know of even larger Jade gemstones? Let us know in the comments below!

The author is the owner of jadegemstone.net.