The Color and Quality of Jadeite and Nephrite

Under the name of Jade we refer to two different types of minerals, both of which are very well known for their application as jewelry materials. One of them is called jadeite and the other one is nephrite. In practice, it is important to be able to tell the difference between the two. Both jadeite and nephrite can look similar to each other. Judging from the color alone is usually not enough to be able to discriminate between the two materials. Today there is still some confusion, even amongst the experts. This article touches upon some basic information about the two varieties of Jade.

Nephrite, is a Ca and Mg silicate. It is classified in the actinolite-tremolite series, and therefore it is not a mineral in the strictest sense of the word. Rather it is a mixture of interlocking actinolite and tremolite fibers. Jadeite is a Na and Al silicate. It is classified in the pyroxene group. It is a mineral of interlocking granular structure.

Jade is a stone traditionally associated with China. The first jadeite stones were imported in China from Burma (nowadays Myanmar) in the 18th century. Until that time, China had known Jade only in the form of nephrite jade. The main source of jadeite today is Myanmar. Jadeite can be found in a couple of other locations throughout the world (primarily California, Japan Guatemala and Switzerland), but none of them is large enough for commercial mining. Thus, Burmese jade is the equivalent name for jadeite.

Interestingly, jadeite was known to the ancient Mayan civilization. Mayans used weapons and tools made from jadeite. This was even before jade became so popular amongst the Chinese people. It is still a sort of mystery as to what the American source of jadeite was, even thought recently there were some deposits found in Guatemala. 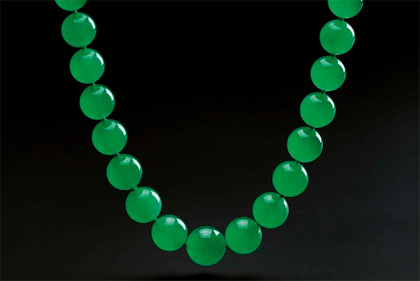 Exquisite jadeite necklace, world’s most expensive. To appear at Sotheby’s in Hong Kong this spring. Expected to fetch a record $ 12.8 million. Source: jingdaily.com

Jadeite can be polished to a very high gloss. Jadeite is generally harder than Nephrite. The surface of Jadeite is usually glassy, versus the surface of Nephrite which is more waxy. Nephrite can be carved and shaped using abrasive tools, and as we said the objects produced from Nephrite can have a soft, greasy surface.

When pure and without external elements, both Nephrite and Jadeite are colorless. But this is not very often the case. Usually there are foreign elements, such as iron, manganese, chromium and others, responsible for the huge variety of colors of Jade. With Nephrite, the white or grayish specimens have more tremolite, whereas the green and yellow specimens are richer in actinolite. Nephrite can be found, with varying degrees of quality and color, all over the world. The most valued are the spinach green and imperial white. Jadeite also comes in different colors and degrees of translucency. The best colors and most translucent stones are rare and come mostly from Myanmar. Jadeite can be gray. It can have all shades of green, yellow, and even gold. But some of the most beautiful colors of jadeite are pink and blue, lavender and reds, even brown and black. Some jade specimens are known to show a couple of these colors at the same time. 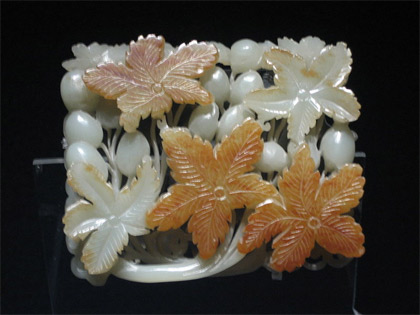 As it is the case with the other gem-quality stones, the intensity of jade’s color is the determining factor for estimating the value of the gem. Transparency is another important factor in ranking different jade specimens. In fact, transparency is not so common a feature — therefore the finest jade specimens will be almost transparent, but never fully transparent. On the other hand, the translucent and opaque stones, will naturally be of lower value.

The homogeneity of jadeite’s color is also as important. The quality jadeite should display the same color throughout its surface and body. There are also some highly valued patterns, and the Chinese people have even named the most popular jade color variations — moss-in-snow is one of them.

Gemologists will examine Jadeite in order to determine if there are some internal fractures. These defects will lower the value of jade. Many jadeite pieces are carved. If so, then the quality of the carving is an additional factor to be considered. All in all, the process of evaluation of jade is a very complex process. If you are not sure what you are buying, always consult the experts.

The author writes for jadegemstone.net.

Beware of fake jade. My gf was conned into buying such a piece.

Unfortunately, a lot of stones are sold as Jade. For example, chrysoprase, serpentine, aventurine, prehnite, to name just a few. Here is a wikihow article on how to tell if your jade is real.

To everyone asking about genuine jade: the most reliable test for determining whether jade is real or not is the scratch test. But please remember that this is a risky operation. While Jadeite is generally hard, nephrite is softer and can be damaged by doing this test. And you may even have a genuine jade but you may potentially damage the piece. So be warned. The other potential problem is that this test is not definitive. It may be a jade simulant, like prehnite or green quartz and still pass the test. That being said, forward to how to perform it. Use scissors. Use the blunt side of them to press onto the jade. Do it gently and draw a line. Pick up a side of your stone that won't be visible afterward, in case the scratch makes a line. If the scratch leaves a line of white color and it remains visible after wiping out the residue from the metal, probably you don't have real jade.

Thanks Brigitte for sharing this useful test.