Quartz is so widely recognized, that it has become a synonym for any crystal. Many people think of Quartz when the word crystal is mentioned to them. But, of course, any gemstone and mineral collector will tell you that there are many different types of crystals other than Quartz. For example, Tourmaline, Emerald, Garnet, Topaz and many other stones build beautiful crystals.

The composition and crystal structure of Quartz

By chemical composition, Quartz is a crystalline form of silica — silicon dioxide, SiO2.

Both tiny and gigantic forms of Quartz can be found. In its large crystal form, it is usually referred to as Rock crystal.

On the Mohs scale of hardness, which goes from 1 to 10, Quartz is positioned around 7, which is relatively hard, for instance, harder than most of the common metals. 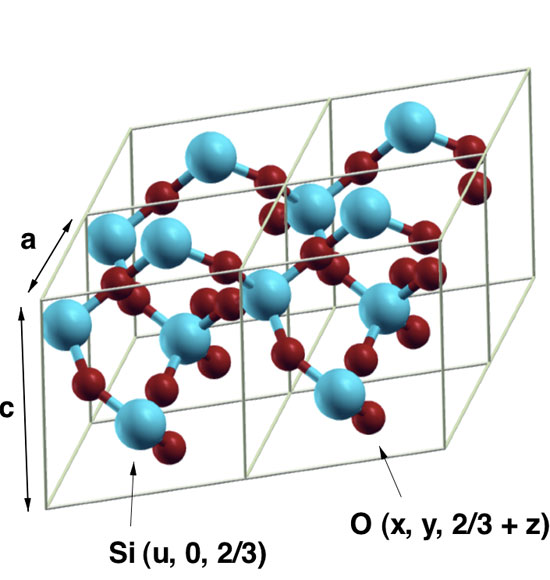 This mineral possesses a vitreous luster. Its habit, which is the scholar term for the characteristic external crystal shape, is rather variable. It can be prismatic, globular, drusy, crusty, trapezohedral or trigonal, and often can be columnar.

Also very often this mineral is found in a form of clusters, pointed aggregate of smaller crystals.

The Quartz crystal structure is rather complicated. From a crystallographic point of view, we distinguish two forms of Quartz: alpha and betta form. The crystal system of alpha Quartz is trigonal, whereas that of betta Quartz is hexagonal. Alpha Quartz is the stable form of Quartz, maintained at normal temperatures and pressures.

What makes Quartz very unique and easily identifiable are its pointed, frequently irregular terminations. Quartz without terminations is almost like not really Quartz. (If you've seen tumbled Quartz you know what I mean.) Double terminated crystals are not uncommon as well. Quartz is known to buid twin formations. The two crystals can make contact in different ways, even at an angle of 90 degrees.

A phantom is formed when one larger Quartz crystal grows over a smaller one.

The color of Quartz

Quartz can have many different colors. Regardless of color, all Quartz varieties are perfectly transparent at best or translucent at worst. According to its colors, Quartz is given different names. For example:

Researchers know that Quartz is the most abundant stone in the Earth's crust. This is partly because this mineral is a common ingredient of many different rock types, including the metamorphic, sedimentary and igneous rocks. It is literary present everywhere, in all parts of our planet.

Quartz can be grown in laboratory. Scientists can do that by using silicon and oxygen as starting materials. They try to imitate the natural growth processes. A so-called seed crystal is used along with the supply of silica and then pressure and heat are applied. The silica atoms are joining the atoms on the regular surface of the seed crystal, forming a larger almost perfect crystal.

Quartz has a number of simulants and, not surprisingly, one of the most common is plain glass. It is easily distinguished from regular glass, so no danger that you will end up buying one. But there are more elaborate simulants. In that sense, we should mention that the popular Swarovski crystals are not natural Quartz crystals at all. Other properties and uses

The crystals of Quartz are rarely perfect. They contain imperfections, such as spots, bubbles, inclusions of other minerals, dislocations, visible colorations, etc. Despite the impurities, Quartz is durable and resistant to weathering. It can withstand many chemicals and, due to its hardness, also mechanical external influences. 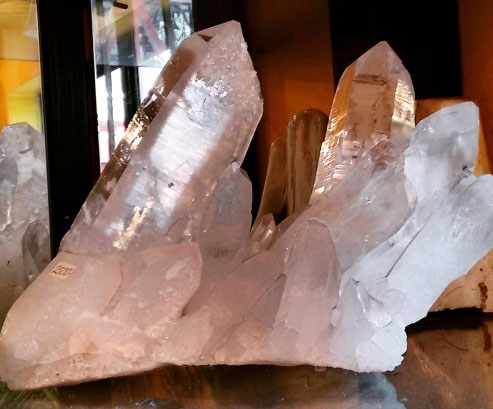 Quartz can be found even in the most unexpected of places. As strange as it may sound, one of the main constituents of sand is Quartz in a form of tiny particles.

Because of its durability and chemical inertness, it has many applications. In the electronic industry, it is used due to its heat resistance and interesting electronic properties. It is also used as an abrasive, polisher, industrial cleaner, in the glass making process, and as a foundry sand.

Another interesting property of Quartz is its piezoelectricity. Piezoelectricity is a scientific term for the ability of some materials to produce electric current as a result of mechanical stress, or, conversely, to vibrate as a result of applied voltage. Other minerals besides, like Tourmaline and Topaz, Quartz are also piezoelectric. This property has resulted in an interesting application of this material: Quartz is used as a resonator for tracking time in Quartz watches.

Of course, Quartz is used as a gemstone in jewelry production. Besides, as one of the best known metaphysical stones, it has a lot of metaphysical uses and meanings.

Quartz has two modifications: a low temperature one called alpha quartz or low quartz and a high temperature one called beta quartz or high quartz. The second modification appears above about 570 degrees celsius (~1060 fahrenheit). Both structures are very similar, with the beta polymorph somewhat more distorted. Transparent high quartz is rare, and most specimens are dull or translucent.