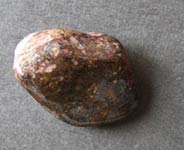 The energy of bronzite promotes certainty and control, encourages us to take control over our own actions and enables us to be sure about what it is that we want in our lives.

The color of bronzite is green or brown with metallic bronze glow.

Bronzite can be found in India, China, Brazil, and Russia.

This stone is a silicate compound of magnesium and iron. Iron, in contrast to magnesium, is much less present in bronzite (up to 15%). The color of this stone brings about a halo of grounding, reflecting the need to take a step back and think about adjusting and redistributing our forces. It is useful in working with chakras, especially with the sacral energy center. It helps in developing a spiritual transformation.

This metaphysical crystal is frequently used for achieving certainty in some area of life due to its ability to put things at their right place, according to their indisputable basic principles. Sometimes some things need to be done without tangible direct personal reward. Material wealth comes only if we appreciate the role that we play in the cycle of life and service. That is why this stone inspires politeness, courage, acceptance and help.

This mineral is used to balance the alkalinity and acidity in the body. It helps in the assimilation of iron and also aids the transition from one cycle of life to another (i.e., puberty, menopause, or alike). It eases the symptoms of aging, helps in cases of skin diseases or allergies. It prevents and eliminates ulcers on the internal organs, strengthens the concentration, and eliminates depression.

The meaning of bronzite could be explained as focused action and politeness. It is a special mineral for planning things and future events due to its ability of dispersing indecision and doubt.

Elixir out of this stone has beneficial effect on breathing problems, sciatic, spasms, and provides the brain with oxygen.

This stone should be charged alongside rock crystal for 12 hours, the best time for this being during the night.

For the longest time I was seeking a brown stone for a ring. I found earrings, and a bracelet in bronzite and felt so good when I was wearing them. This makes so much sense now that I read the meaning for bronzite! How exciting. I love natural semi-precious gem stones so much and always have.

Hi Spiritous,
Thanks for sharing your experiences about bronzite. It is indeed a great stone to wear as jewelry.

Bronzite is also a first class battlestone against the attacks of high-qualified sensitives and black magic men. If they go to Your home at night without the physical body and attack, put a big polished bronzite to the center of their energetical body and they will jump back in seconds. With the medium and little pieces You can protect Your home, bed and any territory. You can tape the thin pieces to Your body and make difficult the job for the energetical vampires. If You have the wounds of energetically attacks, tafe the stone directly to the wound or implant. Warning: It amplifies and sends back the bad energy and can be used as battlestone by strong and very God-loyal persons with clean souls.

Hi Rein. Thanks for this nice write up on using Bronzite as a protective tool. I really appreciate it. God bless.

Have been suffering from jealousy and black magic attacks by my relatives. It affects my entire family. Will keeping a bronzite stone in the house help?

Hi S,
You may want to try the advice of Rein above. In addition, I would recommend invoking the help of the Higher Divine powers, like the mighty protective powers of bellowed Archangel Michael. He will help you strengthen your faith in God and increase the love in your heart. There is nothing better than Divine love to ward off black magic.

I recently purchased a small bronzite wand at my local crystal store, and placed it (boxed) on my bedside night stand. The next day, a person I'd had some interaction with a couple months earlier attacked my character because of a misunderstanding. At first I was insulted, but after getting into bed later that night, my thoughts on the matter became empathetic and understanding. As that turn happened, I realized I was looking at the closed box of the Bronzite; taking it out, holding it, I knew what needed to be done for this person, and was no longer insulted. It's a beautiful feeling stone; compassionate, soft yet magnanimous in its energy. Thank you for your info as it makes wonderful 'sense' now.

Thanks for sharing, Sandra. Great insight about Bronzite based on your personal experience!

plz. Reply my answer for sake of Lord. Can we wear bronzite with lapis or tourmaline quartz.

Sure you can Muslim. I don't see why not. Thanks for the comment, and God bless.

Today I was at the crystal shop near me and I asked the guy in charge of the place which crystal was the best for me and he said Bronzite after some intuitive interfacing with his intuitive connections to spirit.Then I wanted to know why it was, so I asked the handful of bronzite I was trying to choose from. About 20 minutes later after trying to decide which piece I wanted the most I did some prices of elimination thing that forced me to accept the one left at the end and I ended up being left with one of the ones I felt I wanted to stay with but was having trouble being decisive. Then I just happened to leave the store at about 18:18 even though I wanted to stay cause some beautiful women just walked in, but since I left I just happened to get to the bus stop right on time to catch the bus back to my area saying me a many minutes of time I'd otherwise have spent riding home. Then I got home and saw a bunch of people I've been waiting to hear from messaging me, which made me feel that it finally got the desired communications I'd been waiting for through to me, to my delight . I told it to make me the happiest and most positive in everyway and this is how it started, along with me feeling extra smiley the whole way.

I have sensitivity towards stones and can tell you that bronzite activates root area of the body but when combined with pyrite will cause a stillness to fall upon the wearer . Your normal triggers for stress or anxiety will be nullified. you can do a beaded bracelet with patterns of 1 bronzite bead 1 pyrite and another bronzite, then a colored stone of your choice depending on your intent and purpose then another bronzite,pyrite,bronzite and continue the pattern along the length of the strand. This will activate and ground the colored stoned while protecting you in a very palpable way . Bronzite and pyrite can be a life changer giving liberation from anxiety optimism for the future.

Thanks for the great tips.

Hi i just bought a tourmalinated quartz den i added 2 bronzite for my bracelet, after wearing it for 2hrs i feel a liitle headache, i dont know if its too strong for me or since my other bracelet but in combination of black onyx, obsidian, n clear quartz... Does dis have an effect? Or should i remove one of my bracelet?

I would rather recommend combination of black tourmaline and bronzite. Tourmaline will absorb negativity and bronzite will send it back to the sender.

Great advice, Stan
Thanks for sharing.

My mother gave me a bronzite pendant many years ago. Someone once told me it looked like asBestos At that time there was a little on the Internet about it so I put it away and was afraid to wear it. Last night I had a dream I was at the very top of a mountain standing against a stone. I put my arm out to rest it on that stone and a large white dove landed next to me. It hopped over and onto my arm where I held it and carefully touched it's pure white feathers. As I was admiring its beauty I noticed that it's features begin to transform into that of an eagle. I was stroking it and scratching underneath it's Chin which it liked very much. In the dream my bronzite pendant came to me. it was clear to me how similar it was to the layerings of the Eagles feathers. I woke up to find my pendant and this website. with the pure intentions and gentleness from the help of the dove I will have the strength to soar like an eagle. Much love to all

Thanks, Sabrina, for sharing with us your beautiful dream filled with powerful symbolism. A lot of love and light to you too!

Would Bronzite be considered a brown agate? I was prescribed to wear dark brown agate by an Ayurvedic doctor. Most of what I see is brown agate with visible bands. They both are silicate, correct? So would a 'dark brown agate' be the same as bronze??

You can say it is similar (both are silicates) but not identical. There are numerous variation of silicate crystals, depending on the way Silicon and Oxygen are arranged in space. This can make a great deal of difference. Bronzite also has some iron in it, unlike Agate. I would suggest to look for brown agate, as instructed, with or without visible bands. I'm afraid bronzite won't cut the deal.

Interesting blog!! Love to read about bronzite and gain so internal knowledge about it.