Rutile strengthens the energy flow throughout the body. It is often found embedded in other crystals, in which case it strengthens their metaphysical properties, too. The energy aspects of Rutile promote strength and love. They facilitate transformation and growth in all areas of life. Rutile calms the mind and brings order in the mental body.

The color of Rutile is unusually black, but this stone can also be found in brownish and red tones. Very often, Rutile forms needle-like structures when it is incorporated into other crystals. These structures resemble long, golden, or yellow hair. Rutile’s luster is metallic.

Notable occurrences are in Australia, Madagascar, Pakistan, Brazil, Kazakhstan, Norway, and the USA.

The name Rutile originates from the Latin word rutilus, meaning “red”, “golden”, “auburn”, or “shining”. Twin crystals of Rutile are not uncommon. A single Rutile specimen can have up to 6 or even 8 twins arranged into a circular chain. When there are 6 such twins, we speak of a Rutile star. Its spatial arrangement is caused by the rhombohedral shape of the Hematite core out of which the Rutile star emanates.

Rutile is also referred to as “Angel hair”. It is an important, multi-purpose mineral. Rutile is the main ore for titanium production. Titanium is a metal used in many applications because of its low weight, high strength, and corrosion resistance. Rutile is also a mineral of great importance for the gemstone markets, as it creates beautiful, astonishing crystal forms. It is often found as inclusion in Quartz, Tourmaline, Ruby, Sapphire, and other stones.

Rutile heals and balances the aura* because it can dissipate negative energies and unwanted external influences. Like with any other metaphysical crystal, the exact underlying mechanism is not known. It is believed that Rutile eliminates the circumstances that may potentially lead to accumulation of negative energy. It effects the physical, etheric, and astral body.

Rutile makes our personal relationships more stable. In addition, it can harmonize any type of mental or physical imbalance. Rutile promotes the understanding of the hidden forces that rule the universe and helps us understand the higher worlds.

Rutile functions as a restoring and rejuvenating tool with people, animals, plants, and other crystals. It is an important heavenly conduit for supplying the physical body with pranic energy. It helps us resist ageing on a cellular level. In that sense, Rutile helps fight dementia and senility. 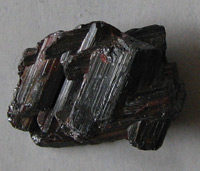 Rutile can be discharged if put in contact with Hematite. It is usually charged in the sunlight or beside Rock crystals.

* Our human aura is the psycho energetic field that pervades all our organs.