The Composition of Quartz

Quartz crystals are probably the best known types of minerals to everyone... If you have not seen one, you probably are not from this planet (just kidding). As a matter of fact, let me ask you a question: Have you ever imagined a macroscopic crystal without having the picture of rock crystal quartz in your mind? Because, I haven't. Those quartz points or singly terminated sticks can be impressive both in their size and in their beauty. These wondrous quartz specimens can be probably considered as prototypes of macroscopic crystal grains. At least this is my interpretation... Those crystals found in quartz rocks are exactly the kind visible with naked eyes. Many crystalline grains in so many micro-crystalline materials are (sadly enough) invisible. 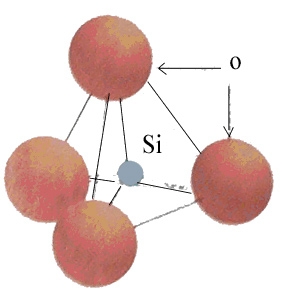 The Great Class of Silicate Minerals

Let us first see what the definition of quartz is. In short, QUARTZ=SILICA. Because, quartz is nothing but silica, we are talking about a type of mineral with chemical composition -- SiO2 ... So if you have looked for a simple straightforward answer, here it is: Quartz is made of Silicon Si and oxygen O. But not everything is so simple... Follow on... I would like to make a digression here, but at the end we will have, I hope, better knowledge about what quartz is. Let us go one step above and take a look at the great class of silicate materials. Quartz or silica, is just one member of the silicate minerals. Silicate minerals contain tetrahedral units of the so-called silicate SiO4 group. Along with it they also contain other elements and groups, this is the group they share in common. Tetrahedral means that silicon Si is placed in the center of a microscopic pyramid, and that the 4 oxygen atoms are located in the corners of this pyramid. Something like this: 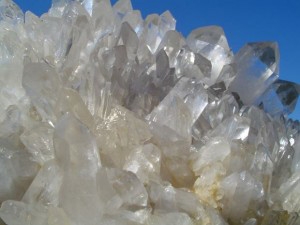 This tetrahedral coordination is basis of all silicates. Even though the formula of quartz is SiO2, in space we have this SiO4 arrangement. If you took any member of this vast group, you would find it there. The only thing that makes each of the silicate types stand out with respect of each other is how two or more of these SiO4 groups combine themselves in a regular fashion in 3D as to produce the whole bulky material. Let me give you an example. Let us suppose that these groups stand on their own ... that every single one of them does not like the presence of another microscopic pyramid near by... we would get the subgroup of Nesosilicates. There will be some gems, ... interesting gems, in this subclass of silicate minerals, for instance, peridot or topaz. If two of these silicate groups merged together, guess what, we would end up with a single combined Si2O7 unit, and the corresponding silicate mineral will belong to the Sorosilicates. You will get the more or less known epidote stone there. I hope you are still following... Now, if these microscopic pyramids joined together in a complex 3D frameworks, there we would have the class of Tektosilicates. This class is important for us, since quartz and thus rock crystal belong there. Therefore in quartz, we would see many of the microscopic tetrahedral units arranged together in such a 3-dimensional pattern as to build complex grids in space. In silica, that is quartz, apart from the silicate SiO4 units, there is nothing else (except for trace elements and impurities) present. In another post we will discuss in detail the unit cell of quartz and some very interesting implications ... now I let us go back where we started and consider only quartz.

This is important! This is crucial in order to properly understand the division which is so often emphasized as basis of the division into families or subgroups of quartz ... but sometimes not fully understood. In any crystalline material, we can distinguish crystal grains. The crystal grains are usually microscopic portions of that material where the crystal structure is extended in a regular fashion following a predefined pattern... It might sound too complicated but it is really simple... The area where the regular pattern of repetition is affected is usually where another of these crystal grain or crystallites begins. If these grains are so large that are visible with naked eye ... you might have guessed already ... we get the macrocrystalline quartz. Here we have the following crystals: Rock crystal, Rose quartz, Citrine, Amethyst, Smoky Quartz, Rutilated Quartz, Tiger Eye... have I forgotten some? It is not so difficult to convince ourselves that these crystals are macroscopic. Take a look at the following photo:) I hope you are able to spot a number of individual macroscopic grains. We usually call them crystals, which is what they indeed are

single-crystals of silica. If the grains are small and cannot be seen even under moderate magnification, we speak of microcrystalline or cryptocrystalline quartz. Here we the following quartz stones: Agate, Jasper, Aventurine, Blood stone, Chalcedony, Sard, Onyx, Carnelian, Chrysoprase, etc... I cannot remember at the moment of the rest of them, but Hey, if you have a clue, please comment bellow.

6/21/2021. More of a question. What tools would be required to shape quartz blocks or blanks into elaborate or complex shapes ? From skulls to anything else ? How would our more ancient societies have handled such tasks ? Thanks, Gregg.

Hi Gregg. That's a good question, becaues the ancient societies couldn't have had sophisticated tools like cutting machines based on diamond. So I don't think we can know for sure. My best guess is some kind of material manipulation without using brute force.