Pietersite — Properties, Metaphysical Use, and Healing

Pietersite reveals the beauty of the soul. It is known as a “storm stone” because of its ability to help whenever there are swift and chaotic changes in life, for example, when you need to rebuild some aspects of your life or transform it entirely. Pietersite instills the ability to see beyond the horizon; it disperses illusion and gives courage to create and appreciate beauty.

Pietersite is a stone of many different shades, but the dominant colors are blue and yellow. Discovered in 1962 in Namibia, this stone is relatively rare. There are only two main deposits of Pietersite in the world — Hunan, China and Swakopmund, Namibia. 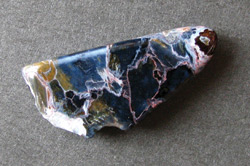 Pietersite is a brecciated aggregate of Tiger’s Eye, and from time to time, it is also referred to as Falcon’s eye. The difference between this stone and Tiger’s eye or Falcon’s eye is in the more densely packed microscopic fibers. The incredible beauty and contrast of colors is what makes Pietersite a unique and highly appreciated stone.

There is a saying that Pietersite holds the keys of the heavenly gates. This is entirely appropriate as this stone is very spiritual in its nature. Pietersite stimulates the third eye energy center as well as the pineal gland. This, in turn, opens the door for spiritual insights and glimpses into the transcendental world. The exotic look of Pietersite offers a stunning palette of many different colors, such as vivid gold, red, and blue. At times, because of the ability to change colors depending on viewing angle, this stone seems almost alive.

The metaphysical properties of blue Pietersite are such that it helps maintain long meditative states of mind. It also helps in getting visions and precognitive thoughts. This stone aligns the energy centers of the body and grounds them into the etheric body. Pietersite is one of the stones capable of tapping into the Akashic records6.

It helps us express our truthfulness toward the Higher Self, which automatically deepens the quality of our life. Pietersite helps us open up toward the totality of whole life7.

It represents unconditional love and forgiveness.

Pietersite will help you master the skill of teaching. It will improve your public speaking skills by advancing the clarity and transparency of your presentation. This stone will also enable easier assimilation of lecture material and ease the learning curve. However, Pietersite is not suitable for short-term results — the best results are achieved if one uses it for years.

In crystal healing, Pietersite helps the liver and intestines. It is also good for the lower extremities. It regulates the metabolism, blood pressure, and body temperature. It also normalizes the function of the pituitary gland and balances the whole endocrine system.

Pietersite should be cleansed once a month under running water. It is best charged if put together with already charged Rock crystals.

6 Akasha is the collective unconscious of all humankind. Among other things, it is composed of archetypal images.

7 The depths of the mind are conquered by expanding our consciousness and by using the powers of recognition and comprehension.

After a disastrous surgery, a sphere contains pietersite was kept on my belly button overnight. .. In the morning my garaged left thigh was 70% better. I swear by it now. Alex x