The Physical and Metaphysical Properties of Crysoberly Cat's Eye

The natural Cat’s Eye is a stone of good luck and fulfillment. It brings peace together with a sense of well-being, optimism, and generosity. It also promotes emotional healing and balance, forgiveness and increased self-esteem. Chrysoberyl is equally believed to be a crystal of creativity, kindness, and protection.

Cat’s Eye possesses a depth of color and transparency, as well as a number of delicate lines that stretch throughout the entire length of the crystal. The lines are clearly visible and they open and close as we move the stone in our hands.

There is only a handful of mines in the world where Cat’s Eye Chrysoberyl is found, and this gem is truly a rarity. The largest deposits of Chrysoberyl are in Brazil, Sri Lanka, Eastern Africa, Russia, Australia, and Canada.

This is one of the most beautiful precious stones that has ever been discovered in Nature. Very often, the honey colored Tiger’s Eye serves as a cheap substitute for the much more valuable Cat’s Eye. Actually, the cat’s eye effect (also known as chatoyancy) can be seen in numerous other gems, but in all those cases, to avoid confusion, one should include the name of that specific mineral, for example, Quartz Cat’s Eye. 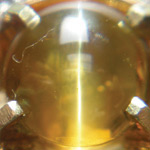 Chrysoberyl should not be mistaken for Beryl. In composition, Chrysoberyl is beryllium aluminate (aluminum oxide that contains beryllium atoms). In contrast, Beryl belongs to the silicate (silicon oxide) family.

The name of Chrysoberyl derives from the Greek terms “chrysos” and “beryllos”, meaning golden jewel. This crystal is the third hardest mineral on the Mohs scale, right behind Diamond and Corundum and before Topaz. In addition to Cat’s Eye Chrysoberyl (also known as Cymophane), the other two popular Chrysoberyl variations are Alexandrite and the ordinary yellow green variety.

Cat’s Eye is considered a stone of spirituality. This crystal is perfect for opening the psychic and spiritual perception. It will enhance you intuition, and help in cases of mental disorders, nightmares, and fear. This is a crystal capable of strengthening the will to heal oneself.

Probably owing to its delicate yellow shades, this jewel has always been related to wealth, power, and abundance. It should be no surprise, then, why the most beautiful forms of Chrysoberyl are so prohibitively expensive. It was highly esteemed in the ancient Vedic literature, where promoting abundance was one of its metaphysical uses.

Since ancient times, Chrysoberyl has been a powerful talisman and stone of protection. It was believed that it would protect the owner from disasters at sea.

Truthfulness, self-control, discipline, and self-mastery are the qualities that are usually ascribed to Cat’s Eye. Chrysoberyl also improves the concentration and the ability to acquire knowledge. It enables the wearer to formulate clear thoughts and to be able to see far and wide. Thanks to the powers of this stone, the negative thoughts are being transformed into positive vibrations. In a similar way, Chrysoberyl is able to improve tolerance, and create harmony and generosity.

Chrysoberyl is a crystal of intense energy, with magical abilities strong enough to assure uncompromising protection against black magic or evil eye. To be able to utilize its powers, it suffices to look at it for a couple of minutes a day, or to carry it with you.

On the physical plane, Chrysoberyl heals the kidneys and pancreas, balances the adrenalin levels, detoxifies the liver, strengthens the lungs and lymph nodes, and treats the eye disorders. It also prevents the progressive short-sightedness. In combination with Amber and Citrine, it can cure the arteries clogging. Chrysoberyl aids the night vision.

Chrysoberyl is unloaded with lukewarm running water. It should be charged for one hour in the morning sun.