Hiddenite stimulates the intellect and promoting knowledge transfer from the higher worlds. Hiddenite is a crystal closely related to the hearth chakra that protects and supports all healthy emotional forms of expression, and attracts prosperity.

The color of Hiddenite is green-yellow to emerald-yellow. It is a beautiful transparent or translucent crystal with a nice glassy luster.

Notable occurrences of Hiddenite are in the USA (North Carolina), Brazil, Madagascar and Afghanistan.

Hiddenite is a rare stone, and that is why a good quality specimen is highly appreciated. Visually, in some respects it can be compared to Emerald, but Hiddenite's color is usually brighter. Some similarity can be found also with Chrysoberyl, Peridot and Green Tourmaline. In fact, Hiddenite is green (or colorless) Kunzite, a variation of mineral Spodumene. Spodumene is a relatively common mineral, but the transparent specimens are scarce. The pink variation of Spodumene is called Kunzite, while, as we mentioned above, the green variation of Spodumene is Hiddenite. 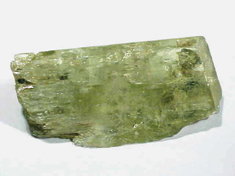 Hiddenite has obtained its name after the 19th century American mineralogist W. E. Hidden, who was first to identify this mineral. North Carolina is the region where, even today, we can encounter exceptional specimens of Hiddenite that are quite unique in their features. In the meantime, several other localities of this mineral have been discovered throughout the world. However, gemology does not consider these newly discovered Green Spodumene specimens as being absolutely identical to the North Carolina's Hiddenite. They lack the unique bright-green or yellow-green color of the original.

On the level of the astral body, Hiddenite helps in recuperating from emotional loss. It is a useful stone for attracting love and business success. Hiddenite is also a calming and balancing crystal that will help you uncover your buried emotions of compassion and charity. It brings trust into your relationships of all kinds. It helps cure psychosomatic disorders caused by the "hidden", long time ago buried and repressed emotions. Hiddenite helps in bringing back the youthful enthusiasm and energy.

On the physical level, this crystal helps with skin problems and blood circulation. It relieves the rheumatic pain in the joints and shoulders, protects against arteriosclerosis and encourages the mobility in the elderly.

Once a week Hiddenite should be unloaded under the flow of running water. It should be charged in the presence of Rock Crystal.