When we ask ourselves what exactly crystal healing stones are, the straightforward answer would be that all types of stones and minerals possess some healing powers within themselves.

There is no single stone without a possibility to work in a beneficial way on a specific life situation in which human individuals may find themselves, or if necessary on a particular health condition. While this general feature of all members of the mineral kingdom is certainly true, we should also know that not all of the specific stones are equally helpful. Some stones are simply more suitable for therapeutic purposes than others, and some of them will reach their full potential in the years to come.

Today, the prevailing wisdom teaches us that healing powers are more likely to be found in the plant kingdom than directly in the mineral world. But some herbal healers know that the best healing herbs are those which are to be found in the high mountain regions where the soil is by definition rich in minerals. So, indeed, even in this case of herbal healing, the mineral substance can be circumstantially involved and related to the healing strength of the plants.

The impact of the healing stones

Nice overview of healing stones can also be found by following this above, but given all the multitude of crystal we can ask ourselves one primary question: Where exactly do these stones function, and what exactly is the domain where they exhibit their powers?

The simple answer is that they work on the more subtle levels of human organization. If we wanted to adopt the materialistic view of today's science we would not be able to find this field of crystal action. Simply, they do not work directly on physical levels. In the case of crystal healing we do not need to take mineral substance in our organism in order to be healed, except maybe when we prepare crystal elixirs.

Actually if you think about it, we are constantly surrounded by the force field produced by large deposits of stones and mineral matter situated in Earth's interior directly beneath our houses, city blocks and larger areas. Our human electro-magnetic fields (often called auras), are constantly within the energy streams of these crystalline deposits. It is no coincidence that we are born in certain areas of the world where certain mineral energies, in addition to the other types of prevailing subtle energies, are predominant.

The way we are affected through the various crystals and stones used in crystal healing is not direct. Instead of affecting directly our physical organization, they impact our subtle energy network which is a base of our physical existence. This energy network has been known to the various Eastern and Western esotheric traditions, and it is often designated as etheric body. Apart from being the energy basis of our physical body, the etheric body has other functions, for example one of them being to serve as a memory storehouse. It is also a seat of the seven chakras which are the most important energy vertices and spiritual centers. Due to this fact, physical contact of the stones with our skin is not always necessary.

Crystals and stones have an amazing capability of concentrating energy and transmitting it to and from our etheric body, for example by fine-tuning with or opening and closing the seven chakras. In this sense, crystals can be imagined more as portals or points of energy. Most of the time, however, the impact and end result of the crystal healing stones will be dependent on the individual consciousness being more or less capable of identifying, directing and manipulating the energy barriers energy blockages and energy flows of our etheric bodies by using suitable crystals as helping tools.

The first and most universal stone used in all healing practices is rock crystals or clear quartz crystal. If one wants to find the most potent all-purpose healing stone that improves general health one should look no farther. This stone should be used in combination with other healing stones as it is known to enhance the energy of almost all the other crystals. But rock crystal is much more than a physical healer, it is a wondrous spiritual stone, and indeed only those stones that are able to extend their influence on the more spiritual levels of our beings are also able to heal the physical body.

Immediately next to the rock crystal, we should mention the variety of colored quartz stones, such as amethyst , agate, citrine, jasper, and the other silica based crystal healing stones. Although their basic crystal structure is to a good extent the same as it is the case with rock crystals, the slight modification via impurities or dopant atoms means a lot it terms of their specific healing qualities.

We will go in detail also when it comes to the health benefits of diamond, ruby, sapphire, topaz and emerald precious stones. They all have very special properties useful in crystal healing. Actually, it is a good place to emphasize the following fact:

In crystal healing there is no such thing as precious, semiprecious or non precious stones. This is an artificial classification scheme forced by the jewelry manufacturers for marketing purposes. Every single crystals and stone is equally following its evolutionary path, refines itself and develops its potential as we humans do, and they all equally can contribute and donate their precious energy patterns to promote our purposes.

Agate is a stone of relaxation, peace, cleansing, balance, meditation, vitality and grounding. It can soothe your pain, balance your Yin and Yang energies, stimulate your analytic capabilities, awaken your latent talents, strengthen your sight, and help in the different stressful situations of everyday life. Agate is known to be able to stabilize the energies of your own energy field -- aura -- and dissolve inner strain. 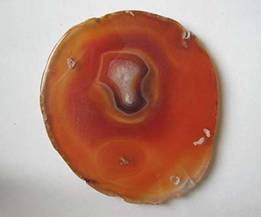 The color of agate

Agate as a crystal healing stone comes in many various forms, shapes and colors. Nevertheless, it is a stone that can be easily recognized due to its multi-level / multi-band composition. Its colors can be very vivid and totally different from one stone to another, and often you wouldn't be too surprised to find out that some stone you have never seen before belongs to the vast family of agates. They can be of all shades and colors, such as for example blue, brown, milky white, rose, gray, violet, yellow, green, red and orange. The color of the various agates originates from minute and often unknown inclusions, or trace elements. You can be attracted to some particular color based on your personal affection or preference which may reflect your own specific needs or imbalances in your physical body.

The symbolism and other properties

When dealing with agates one should not forget the importance of symbolism that can be seen or discovered in their patters. Their shapes, circles, eyes, crosses, even landscapes and panoramas although seemingly random can indeed be understood as a sort of universal representation of the forces of the macrocosm onto the mineral world and should not be lightly dismissed.

While this stone can never be found fully transparent, its semi transparent and opaque forms are so vivid that nobody can dispute their pictorial appearance, and beautiful diversely colored band. Agate was born a long time ago in the circular cavities of the volcanic rocks.

Notable occurrences are in Mexico, Brazil, Australia,, Morocco, Spain, India and some areas of Africa.

Agate belongs to the group of silica based minerals. It is a variation of quartz classified within the so called "chalcedony" family. Agate crystals are often cut in thin planes, but they can also be purchased as tumbled stones, or sometimes as totally natural raw specimens.

Agates are universal balancing stones of subtle energies. They offer protection, and are especially suitable for protection of children. Whenever needed they can help you increase your courage as well as your creativity. Agate is known to be capable of enhancing your energy in waves, so it is very useful when there is a need to overcome a certain difficult situation in which additional efforts and extra resources are required.

Agate can help you if you find yourself in a situation where you find it difficult to forgive someone for the caused pain, despair, or bitterness in some complicated love or family relationship. This stone can help you find the necessary courage to forgive and forget. Wear agate if you fell yourself restrained, under pressure, or confined in your current obligations.

In ancient times the forces of the four elements were considered as some of the most powerful forces of the Universe. They still are even though we have forgotten our spiritual relationship to them. Agates were justifiably linked to the earth element. They are under the influence of the Earth force fields and the outside planets have only small influence on them. Thus, agate has an unparalleled ability to affect the physical body first, and starting from there, affect the other subtle auras and bodies in ascending order depending on the stone variation in this huge family. If you expect difficult battles in your personal or business life where there is a need to be open and honest with yourself agate is a stone for you. If you need strength to persist on your predetermined quest agate is also your stone.

Some people have reported that some agate variations can help in achieving better results in athletics.

When purchasing agate pay attention on the quality of the final polish of the stone. The most beneficial stones are those of exceptional aesthetic features, with the right symbolic shapes that can enhance their force fields. We know that the three-sided stones are symbolic representation of the trinity, the square stones are good if you want to enhance the symmetry and fundamental issues, while the round specimens are suitable for applications in metaphysical work.

Agates are often either neglected or misunderstood with respect to their healing abilities, probably because they are so common minerals, but also owing to their variety which makes the identification and classification difficult. They work beneficially on many areas of the human organism, in particular on the blood vessels, lymphatic system, digestion, etc. Its abilities are enhanced if combined with aquamarine.