Abundant in many mineral deposits, sphalerite is quite rare in gemstone quality. It is often mentioned in the gemological literature and allusions are made to its very high refractive index and dispersion. These two properties alone would lead us to expect a dazzling stone but this is not the case. For example, its dispersion, which translates into fire - on of the most important feature of the gem minerals, is as high as 0.156. This is several times higher than the corresponding value of diamond .

Low quality sphalerite stones can be found relatively inexpensive. However, gem quality jewels are usually not so cheap, due to the gemological reasons discussed bellow. As of the most dispersive stones, some incredible Sphalerite gemstones can have a bright metallic luster (see the photo on the right). 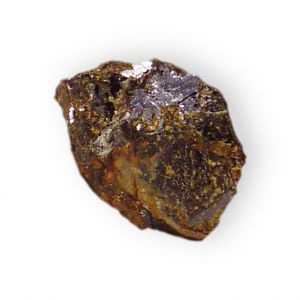 The chemical formula of sphalerite is ZnS, indicating that it belongs to the sulphate class of mineral. It is rarely pure, meaning that usually it occurs with some iron Fe substituting for Zn. It may also contain magnesium Mg, manganese Mn cadmium Cd, indium in and gallium Ga.

Faceting and Polishing of Sphalerite

Sphalerite causes lapidary difficulties in polishing due to its softness and ease of cleavage. There are six dodecahedra cleavages, each of them perfect, and their geometry makes it almost inevitable that there will be several which will nearly coincide with some facets. When this happens, polishing by using standard techniques is very complicated.

It is possible, however, to polish sphalerite to a brilliant finish and, starting with suitable material, the finished product will meet all expectations. Surface finish of gems and a good polish is important on all gemstones, especially on those which are softer and more difficult to prepare properly.

An examination of a number of ordinary sphalerites shows facet surfaces covered with extremely fine striations left by the polishing agent. The luster is generally dull, resembling a sheen more than a true adamantine reflection.

Any striations, regardless of how minute, function exactly like a set of microscopic prisms and effectively scatter any light rays falling on the surface. As a result, much light is lost and the remainder is diffused within the gem, giving feeble reflections and scarcely any dispersive effects. In such stones, the facet surfaces are not truly polished; rather, they consist of fine grinding interspersed with polished areas. Naturally, since the bands are eliminated by proper polishing, the optical effects are heightened until a correctly prepared gem bears little resemblance to its former self.

The Color of Sphalerite

One other factor should be mentioned in connection with the brilliance of sphalerite; that is, color. Ideally, pure sphalerite would be colorless but this is extremely rare in nature: even the so-called "colorless" sphalerite, is probably always somewhat tinted. Most faceting-grade sphalerite is brownish, reddish, reddish yellow, or green, sometimes with patches and streaks of different colors intermixed in the same specimen. It has been noted that of all colors, brownish and reddish seem most absorptive of light and may provide verydisappointing gems after being cut. Greenish and yellowish material on the other hand, is more apt to produce satisfactory stones. Even a slight trace of red or brown seems to "kill" the reflection of light in the stone.

Notable quality gems are found in Franklin, New Jersey, Cananea, Mexico, or Picos D'Europa, Spain. Several other localities have produced their share of facetable sphalerite, among which may be mentioned a brownish kind from the mines of Neyhart in Montana and small red crystals of "ruby zinc" from Tiffin, Ohio. The latter can seldom provide a stone of more than a carat or two in weight but are attractive otherwise.