How to Tell What Quartz Crystal You Have

Recently we received the following question from one of our visitors

how to tell what rock crystal you have?

Quite frankly, this dilemma is relatively easy to answer once you have got the basic knowledge about the several most common quartz varieties from the mineral kingdom.

But, if you ask about rock crystal specifically - that is, not about quartz in general - then you have the colorless variation which is extremely easy to set apart from the other members of this vast mineral family.

Color is one strong indicator of the type of quartz you have.

As we said, if you quartz crystal is colorless or nearly, then it is called "rock crystal".

If your quartz is purple it is Amethyst. 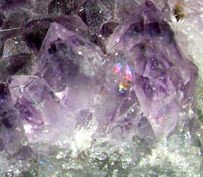 If it is yellowish, or yellow-brownish, it must be Citrine .

In cases of black or brown colors but still transparent, you have what's being called Smoky Quartz. 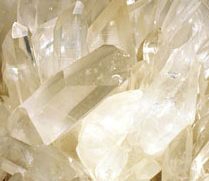 If the color of the quartz is pale pink to rose red (similar to these quartz beads ), you have the Rose Quartz.

If the color is pale green, you would get the so called Prasiolite, or Green Amethyst.

Carnelian is translucent reddish orange quartz, whereas aventurine is green translucent quartz with addition of other minerals.

There are many other colors that will give additional types, such as milky quartz, lemon quartz, lavender quartz, etc.

Many inclusions, even if present in concentrations as low as several percent within the pure SiO2 structure of quartz, will alter the color and can produces some additional hues and nuances.

Probably the most important case of this category is rutilated quartz. This stone is a composite rock where Rutile TiO2 needles are being embedded in the silica matrix of quartz.

The resulting color can be mixture of extraordinarily beautiful yellow or golden within the colorless bulky mineral piece.

Another example is Lithium Quartz . It possesses lavender inclusions of lithium within, which in turn produces very nice hues within the body of otherwise pure rock crystal.

All the above stones are either transparent or translucent. The opaque varieties of quartz include jasper, agate , tigers eye, onyx, sardonyx and many more. But then, these stones are not really considered crystals - they have no regular form.

This text was just a short introduction into "quick and dirty" determination of the type of quartz crystal you have. As we said above, it is ROCK CRYSTAL - you are faced with no problem, it has to be more or less clear, colorless and relatively transparent just like this natural rock crystal pendant .